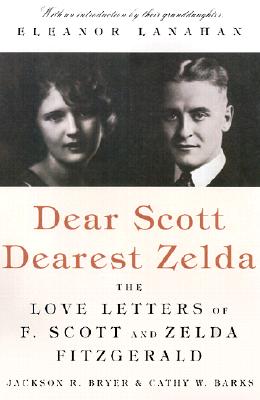 The Love Letters of F. Scott and Zelda Fitzgerald

Through his alcoholism and her mental illness, his career lows and her institutional confinement, F. Scott and Zelda Fitzgerald's devotion to each other endured for over twenty-two years. Now, for the first time, we have the story of their love in the couple's own letters. Dear Scott, Dearest Zelda consists of more than 75 percent previously unpublished or out-of-print letters as well as extensive narrative on the Fitzgeralds' marriage by Fitzgerald scholars Jackson R. Bryer and Cathy W. Barks. Dear Scott, Dearest Zelda features black-and-white and color photographs, and a candid introduction by Eleanor Lanahan, the Fitzgeralds' granddaughter.

"Carefully annotated . . . To have [the letters] all so well presented in one volume is useful indeed. A boon for general readers as well as literary scholars."—Kirkus Reviews

"These letters, many never before published, suggest that Scott and Zelda were both, at heart, Protestants, not voluptuaries; what comes through most clearly in this collection is their dogged, back-bowed faith in work and their dependence on each other . . . Zelda is an extravagant and funny correspondent, and watching her transformation from ingenue ('I love being rather unfathomable') to survivor is heart-rending."—The New Yorker

"[An] invaluable collection . . . Eloquently introduced by Eleanor Lanahan, the Fitzgeralds' granddaughter . . . and pegged throughout with useful commentary, this exceptionally moving correspondence reveals two ardent and creative souls struggling with the ruthless demands of the artistic imperative as well as two terrible diseases not well understood at the time, he with alcoholism, she with mental illness. The majority of the letters are Zelda's, and they're dazzling in their vividness, metaphorical richness, and humor, and unfailing in their affection."—Donna Seaman, Booklist

"This collection of letters by the Fitzgeralds to each other covers their entire relationship, from their courtship in 1918 to Scott's death in 1940 . . . Many of the letters, especially in Part 3, are by Zelda, so this collection lets the reader sample the full range of her thoughts and emotions and helps correct mistaken impressions of the marriage left by past biographies. The editors' introductions and historical narratives are helpful in giving the broader contexts of the couple's lives and times, as are the photographs and explanatory footnotes."—Morris Hounion, Library Journal

Jackson R. Bryer is a professor at the Universary of Maryland. He has edited the Fitzgerald-Perkins correspondence and "Selected Letters of Eugene O'Neill."

Cathy W. Barks teaches American literature at the University of Maryland.
Loading...
or
Not Currently Available for Direct Purchase