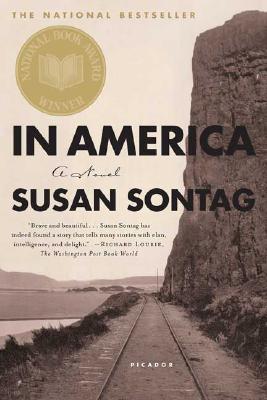 In America is a kaleidoscopic portrait of America on the cusp of modernity. As she did in her enormously popular novel The Volcano Lover, Susan Sontag casts a story located in the past in a fresh, provocative light to create a fictional world full of contemporary resonance.

In 1876 a group of Poles led by Maryna Zalezowska, Poland's greatest actress, emigrate to the United States and travel to California to found a "utopian commune." When the commune fails, Maryna stays, learns English, and—as Marina Zalenska—forges a new, even more triumphant career on the American stage, becoming a diva on par with Sara Bernhardt.

In America is about many things: a woman's search for self-transformation; the fate of idealism; a life in the theater; the many varieties of love; and, not least of all, stories and storytelling itself. Operatic in the scope and intensity of the emotions it depicts, richly detailed and visionary in its account of America, and peopled with unforgettable characters.

In America is the winner of the 2000 National Book Award for Fiction.


Praise For In America: A Novel…

“Often brave and beautiful . . . The scope of the take is vast, and there is a largesse in the telling, the sheer happiness of art. But In America is also an intimate portrait of a willful woman who, like the liner which brings her to America, trails a great wake behind her . . . In this novel about Poland and America, acting and living, transformation and respiration, Susan Sontag has indeed found a story that tells many stories with elan, intelligence and delight.” —Richard Lourie, Washington Post Book World

“A fascinating exploration of what's real in a culture that preaches authenticity but worships artificiality.” —Christian Science Monitor

“What is wonderful about this book is . . . [the] counterpoint of novelist and essayist, of innocence and knowingness. From the knowingness comes another excellence of In America, its cat's cradle of meanings.” —Joan Acocella, The New Yorker

“In America displays Sontag in a relaxed, pleasure-seeking mode, guiding her character through a long travelogue in time, specifically the beginnings of the gilded age in the brave new world. Here are sumptuous theaters in Manhattan and hotels in San Francisco; a journey 1,900 feet down into a silver mine in Virginia City, Nevada; cameo appearances by such luminaries as Henry James and the Shakespearean actor Edwin Booth.” —Paul Gray, Time

“Like its brilliant essayist author, this 'novel' defies every convention of storytelling . . . Most original and innovative.” —Philadelphia Inquirer

“An exhilarating journey into the past, freighted with dazzling detail, the product of an endlessly inquisitive, historical imagination.” —The Economist

“Sontag weaves an expansive broad narrative cloth here, keeping us under her spell until the very last word.” —Chicago Tribune

“A powerful story of a woman transcending herself . . . Mesmerizing.” —Palo Alto Daily News

“Susan Sontag is a powerful thinker, and a better writer, sentence for sentence, than anyone who now wears the tag 'intellectual.'” —New York Observer

“Sontag crafts a novel of ideas in which real figures from the past enact their lives against an assiduously researched, almost cinematically vivid background.” —Publishers Weekly (starred review)