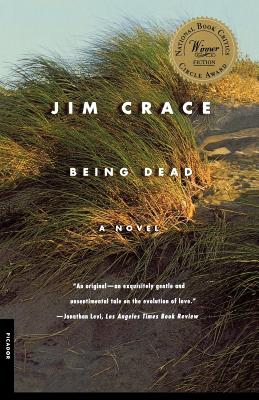 Lying in the sand dunes of Baritone Bay are the bodies of a middle-aged couple. Celice and Joseph, in their mid-50s and married for more than 30 years, are returning to the seacoast where they met as students. Instead, they are battered to death by a thief with a chunk of granite. Their corpses lie undiscovered and rotting for a week, prey to sand crabs, flies, and gulls. Yet there remains something touching about the scene, with Joseph's hand curving lightly around his wife's leg, "quietly resting; flesh on flesh; dead, but not departed yet."

"Their bodies had expired, but anyone could tell—just look at them—that Joseph and Celice were still devoted. For while his hand was touching her, curved round her shin, the couple seemed to have achieved that peace the world denies, a period of grace, defying even murder. Anyone who found them there, so wickedly disfigured, would nevertheless be bound to see that something of their love had survived the death of cells. The corpses were surrendered to the weather and the earth, but they were still a man and wife, quietly resting; flesh on flesh; dead, but not departed yet."

From that moment forward, Being Dead becomes less about murder and more about death. Alternating chapters move back in time from the murder in hourly and two-hourly increments. As the narrative moves backward, we see Celice and Joseph make the small decisions about their day that will lead them inexorably towards their own deaths. In other chapters the narrative moves forward. Celice and Joseph are on vacation and nobody misses them until they do not return. Thus, it is six days before their bodies are found. Crace describes in minute detail their gradual return to the land with the help of crabs, birds, and the numerous insects that attack the body and gently and not so gently prepare it for the dust-to-dust phase of death.


Praise For Being Dead: A Novel…

“It's not clear to me why Jim Crace isn't world famous. Few novels are as unsparing as this one in presenting the ephemerality of love given the implacability of death, and few are as moving in depicting the undiminished achievement love nevertheless represents.” —Jim Shepard, The New York Times Book Review

“Jim Crace's work grows more compelling and brilliant with each new novel . . . Being Dead will undoubtedly stand out as one of the literary masterpieces of the early 21st century.” —Greg Burkman, The Seattle Times

“Crace archly explores life and death and the effect of chance upon the two . . . [He] pulls off a remarkable fusion of chaos theory and natural order in telling this story.” —Frank Caso, Booklist

“An extraordinary work of imagination, witty, precise, immaculately written, and full of scientific detail, all of it convincing, none of it true.” —Times Literary Supplement

“Sumptuously exact . . . The naked daring of Crace's subject matter seems to have produced prose more majestic and assured than any of his previous novels . . . This story's terse, drumming, iambic utterances often come close to verse, and its wit matches the best of any of Crace's contemporaries . . . [But] this is the particular miracle of Being Dead. These lives at first appear too unremarkable to claim our attention, and the physical facts of their end too repulsive to allow us to care, yet we are intensely involved in the drama . . . Our caring, as Crace makes clear, is a tribute to life itself.” —Carey Harrison, The San Francisco Chronicle

“A triumph. What Crace, with dazzling originality, has done is to log the death of two natural scientists from an appropriately physical point of view. No detail is spared, yet the effect is strangely poetic and even reassuring . . . In that spare story a universe of poetry and observation is contained. This is a work of near-genius . . . [by] one of the most distinctive and talented writers of our time.” —Justin Cartwright, The Literary Review

“Crace writes with the power of a Darwinian god . . . a novel of astonishing intensity. Writing so deeply tactful and loving of the biological machine we call the body is rare. Crace is the only writer capable of writing like this--luscious, rich, heavy with ornament and arcane science, yet ethically focused . . . Being Dead is one of the best books written since the death of Beckett . . . Read this book.” —London Evening Standard

“A virtuoso piece of writing, with page after page filled with harsh, earthy evocation of the mini-sagas of living and dying.” —Dan Cryer, Newsday

“Crace writes with such staggering beauty, intelligence and mesmerising sensitivity on love, nature and zoology, death, mourning and the workings of life itself that Being Dead is a work that a reader will marvel at and cherish. It cannot be overpraised or, once read, easily forgotten.” —Susan Miron, The Miami Herald

“What a stylist Crace is, and what a vision . . . Crace has the rare gift of seeing the splendor under the grass. In his 'everending' vision, death and romance are inextricably entwined . . . [A] tour de force from one of Britain's best novelists.” —Wendell Brock, The Atlanta Journal-Constitution

“A most unexpectedly romantic story and an exceptional feat, to so commingle the mundane and the sublime, that one is left awestruck and dazzled.” —Kirkus Reviews (starred review)

“Crace has crafted an original--an exquisitely gentle and unsentimental tale on the evolution of love . . . [Crace is] a highly-evolved novelist, and an active, living anatomist of love.” —Jonathan Levi, Los Angeles Times Book Review

“Strong, inventive, and above all courageous . . . For all the 'experimental' feel that he imparts to his work, the fact is that, to say it again, Crace is working firmly within the mainstream of English fiction, and a good thing that is . . . A solid yet always adventurous writer, he has done much to revitalize a tradition in danger of becoming moribund.” —John Banville, The New York Review of Books

Jim Crace is the author of many novels, including Quarantine, which won the 1997 Whitbread Novel of the Year Award and was shortlisted for the 1997 Booker Prize for Fiction. His novels have been translated into eighteen languages. He lives with his wife and children in Birmingham, England.
Loading...
or support indie stores by buying on