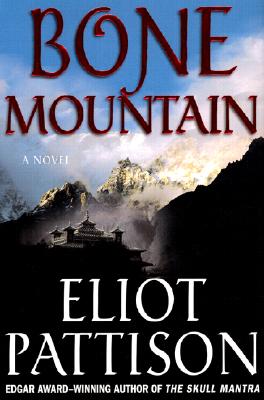 Deep in the heart of Tibet, Shan Tao Yun, an exiled Chinese national and a former Beijing government Inspector, is caught between the brutal Chinese army and a Western oil company. Shan has agreed to lead an expedition to return the eye of an idol, stolen almost a century ago and recently, clandestinely recovered, to a distant valley, an act that will fulfill an important Tibetan prophecy. But the pilgrimage turns into a desperate flight when the monk who is to lead them is murdered. Shan also discovers that the stone was stolen back from a brigade of the Chinese army that is now in hot pursuit.

Still possessing an investigator's love of truth, Shan faces a perplexing tangle of mysteries. Why are the Chinese so desperate to retrieve the stone eye, why has an American geologist abandoned the oil company's drilling project and fled into the mountains, and why are rumors sweeping the countryside that an ancient lama is returning to liberate this country? As he digs into these questions, Shan realizes that there is more at stake than mere justice: the spiritual survival of his people is in danger as well.

Complex and compelling, Bone Mountain is a spectacular achievement from a major voice in crime fiction.

"Intense and captivating exploration of modern Tibet.... Pattison has taken an unknown world and made it come alive."
--Library Journal
"Pattison's densely plotted and incredibly detailed novel induces his entranced readers to care deeply about both his compelling characters and long-suffering Tibet."
--Booklist (Starred Review)
"Despite the number of books about Tibet, few have brought us as close to ground level awareness as Eliot Pattison has done with Bone Mountain.... Though this is a deeply reflective book, it is a true late-night, page-turner delight."
--Chiang Mai City Life
"Enlightening, sometimes brilliant, often moving."
--Kirkus Reviews
"Pattison's empathy for the cause of Tibetan independence is admirable."
--Publishers Weekly

Eliot Pattison is the author of "The Skull Mantra," which was a finalist for the Gold Dagger and winner of the Edgar Award, and "Water Touching Stone." He is a world traveler and frequent visitor to China, whose numerous books and articles on international policy issues have been published around the world.
Loading...
or
Not Currently Available for Direct Purchase