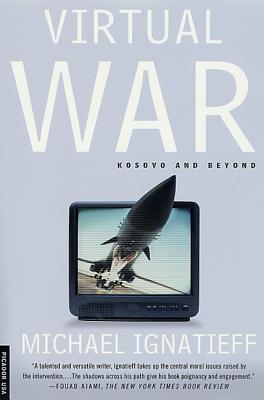 For a decade, Michael Ignatieff has provided eyewitness accounts and penetrating analyses from the world's battle zones. In Virtual War, he offers an analysis of the conflict in Kosovo and what it means for the future of warfare. He describes the latest phase in modern combat: war fought by remote control. In "real" war, nations are mobilized, soldiers fight and die, victories are won. In virtual war, however, there is often no formal declaration of hostilities, the combatants are strike pilots and computer programmers, the nation enlists as a TV audience, and instead of defeat and victory there is only an uncertain endgame.

Kosovo was such a virtual war, a war in which U.S. and NATO forces did the fighting but only Kosovars and Serbs did the dying. Ignatieff examines the conflict through the eyes of key players--politicians, diplomats, and generals--and through the experience of the victims, the refugees and civilians who suffered. As unrest continues in the Balkans, East Timor, and other places around the world, Ignatieff raises the troubling possibility that virtual wars, so much easier to fight, could become the way superpowers impose their will in the century ahead.


Praise For Virtual War: Kosovo and Beyond…

“Ignatieff has produced a work that is both intellectually unflinching and genuinely open-minded. Ostensibly a consideration on the moral and political implications of the West's military intervention in Kosovo, the book is in fact the best exploration of both the operational and moral dilemmas of humanitarian war that has yet been written . . . A considerable achievement.” —David Rieff, Los Angeles Times Book Review

“Arresting . . . Helps combat many of the cliched images we have of the Balkans, and explain how the world's most powerful military alliance had its credibility put to the test in a long-neglected corner of Europe.” —Michael Dobbs, The Washington Post Book World

“A talented and versatile writer, Ignatieff takes up the central moral issues raised by the intervention . . . The shadows across his path give his book poignancy and engagement.” —Fouad Ajami, The New York Times Book Review

“Virtual wars lead to a 'less stable world,'' he concludes, because the victors do not stay, do not 'bring order.' Animated with emotion: informed, documented, and essential.” —Kirkus Reviews

“Vividly reported and thoughtful . . . Something like the Yugoslav tangle may confront us again,and Ignatieff's book will help our thinking if and when the time comes again to unleash the dogs of virtual war.” —Bruce Nelan, Time magazine

“Citizens or their representatives will periodically clamor for the military to intervene. When they do, the military will go. It is useful, therefore, to read Ignatieff to better understand the conditions of these kinds of missions. From that understanding, we may reach insights that may allow us to find solutions, or at least to stop the killing.” —Col. Gregory Fontenot, Army

“Ignatieff is one of the most thoughtful commentators. He combines superior reporting with provocative and troubling insights on the world we've inherited.” —The New York Review of Booksr

“To the illumination of dark deeds on the killing fields, Ignatieff brings a poetic sensibility and a lyrical style. His insights succeed brilliantly.” —David Fromkin, Foreign Affairs

“It is not easy to categorize Michael Ignatieff. He writes something very like moral philosophy. . . . A talent for historical exposition marks everything he writes. Cultural commentator is near the mark, but perhaps public moralist would be the proper description.” —Alan Ryan, The New York Times Book Review

Michael Ignatieff is a frequent contributor to The New Yorker and The New York Review of Books, among other publications, and the author of many acclaimed books, including Blood and Belonging, Isaiah Berlin, Virtual War, The Warrior's Honor, The Needs of Strangers, and The Russian Album. He lives in London and Cambridge, Massachusetts.
Loading...
or support indie stores by buying on