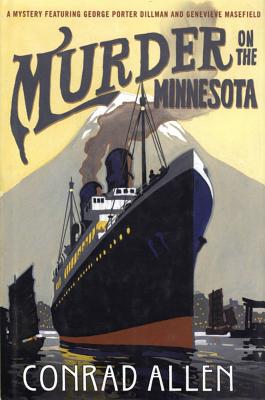 Murder on the Minnesota

Fresh from a harrowing trans-Atlantic crossing aboard the Mauretania, and having recently earned a reputation as the best team of shipboard sleuths to sail the seven seas, George Porter Dillman and Genevieve Masefield hardly set foot on land before embarking on another assignment.

Temporarily forsaking the Cunard Line to work as private detectives aboard the Minnesota, a combination freighter and passenger ship owned by the Great Northern Steamship Company, the couple are eagerly anticipating the prospect of a cruise bound for the Far East. Once aboard, the two begin to establish separate social circles in order to keep an eye on as many passengers and crew as possible. As the ship gets underway it's smooth sailing, and George and Genevieve are hoping that perhaps this will be their first uneventful cruise.

Unfortunately, their luck turns quickly as a fiery Catholic missionary is murdered in what proves to be the first of a series of crimes that will stretch them to their limit. Dillman and Genevieve have to use all their skills to combat danger on more than one front, and to prevent an otherwise idyllic (and romantic) trip from becoming a terrifying nightmare.

As fans of Conrad Allen and his nautical adventures have come to expect, Murder on the Minnesota packs another fast-paced, exhilarating mystery into the exquisitely rendered world of romance and suspense aboard the majestic ocean liners of the early 20th century.

Conrad Allen is the author of two previous mysteries in this series, "Murder on the Lusitania and Murder on the Mauretania." He lives in England.
Loading...
or
Not Currently Available for Direct Purchase