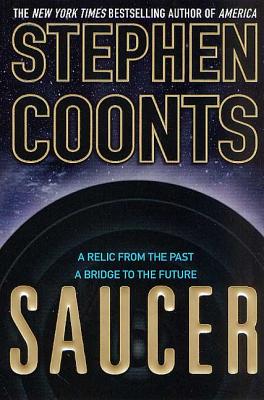 Saucer is a dazzling flying story and an action-filled look at what might have been...and what might be.

Stephen Coonts has earned an extraordinary worldwide reputation with his military thrillers featuring Jake Grafton, one of the most popular and recognizable characters in contemporary suspense fiction. In this exhilarating departure, Coonts takes readers on an imaginative journey into space that is as suspenseful as any of his other stories . . .

When Rip Cantrell, a seismic survey worker in the Sahara, spots a glint of reflected light in the distance, he investigates-and finds a piece of metal apparently entombed in the sandstone. Before long, Rip and his colleagues uncover a flying saucer that has been resting there for 140,000 years.

Their discovery doesn't remain a secret for long. The U.S. Air Force sends a UFO investigation team, which arrives just minutes before a team sent by an Australian billionaire to steal the saucer's secrets. Before either side can outwit the other, the Libyan military arrives.

Meanwhile, Rip has been checking out the saucer. With the help of a beautiful ex-Air Force test pilot Charley Pine, Rip flies the saucer away, embarking on a fantastic journey into space and around the world, keeping just ahead of those who want the saucer for themselves.

“Tough to put down.” —Publishers Weekly

STEPHEN COONTS is the New York Times bestselling author of more than thirty novels that have been translated and published around the world. His books include The Disciple, The Assassin, and the Deep Black and Saucers series, among many other bestsellers. A former naval aviator and Vietnam combat veteran, he is a graduate of West Virginia University and the University of Colorado School of Law. He lives in Colorado.
Loading...
or support indie stores by buying on