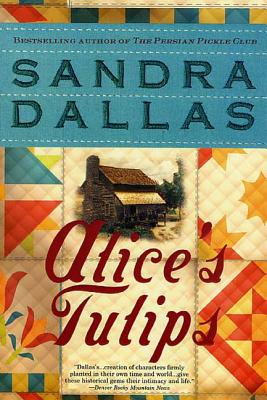 Alice Bullock is a young newlywed whose husband, Charlie, has just joined the Union Army, leaving her on his Iowa farm with only his formidable mother for company. Alice writes lively letters to her sister filled with accounts of local quilting bees, the rigors of farm life, and the customs of small-town America. But no town is too small for intrigue and treachery, and when Alice finds herself accused of murder, she discovers her own hidden strengths. Rich in details of quilting, Civil War-era America, and the realities of a woman's life in the nineteenth century, Alice's Tulips is Sandra Dallas at her best.

Award-winning author Sandra Dallas was dubbed “a quintessential American voice” by Jane Smiley, in Vogue Magazine. She is the author of The Bride’s House, Whiter Than Snow, Prayers for Sale and Tallgrass, among others. Her novels have been translated into a dozen languages and optioned for films. She is the recipient of the Women Writing the West Willa Award and the two-time winner of the Western Writers of America Spur Award. For 25 years, Dallas worked as a reporter covering the Rocky Mountain region for Business Week, and started writing fiction in 1990. She lives with her husband in Denver, Colorado.

Praise For Alice's Tulips: A Novel…

“Witty and engaging...The details of Civil War life are richly presented, and the characters who people Alice's letters are relayed with charm.” —Houston Chronicle