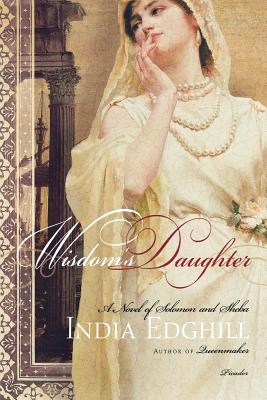 A Novel of Solomon and Sheba

Following Queenmaker, "her majestic debut" (People), India Edghill's Wisdom's Daughter is a vivid and assiduously researched rendition of the biblical tale of King Solomon and the Queen of Sheba. As the Queen's search for a true heir to her throne takes her to the court of the wisest man in the world, both she and the King learn how to value truth, love, and duty . . . and the king's daughter learns to be a forceful woman in a man's world.

India Edghill is a librarian living in the Mid-Hudson Valley in New York. She is the author of Wisdom's Daughter, which was a Romantic Times Nominee for Best Historical Fiction, Queenmaker and Delilah.

Praise For Wisdom's Daughter: A Novel of Solomon and Sheba…

“A powerful and unique take on the biblical story, Wisdom's Daughter brings readers into the biblical world through a feminist perspective. Edghill's strong female characters, good and evil, leave their mark on history and on us. Edghill opens new vistas for readers and makes us think more about the matriarchs, not just the patriarchs, of the Bible. Brava!” —Romantic Times BookClub Magazine

“Wisdom's Daughter will appeal to the Red Tent crowd, both for its emphasis on the role of women in ancient Israel and for the author's ability to bring history to life. Edghill transforms a didactic fable, the story of King Solomon and his brief interaction with the Queen of Sheba, into a powerful love story.” —Jennifer Baker, Booklist

Who was Abishag, and why does she play such an integral part in the story? What was her relationship to King David, King Solomon, Queen Michal, and Princess Baalit?

What are the advantages of Sheba being a matriarchy? What are the disadvantages? How do they compare to those nations ruled by men?

What had the Israelites given up to gain a king? In exchange, what did the king bring them?

Why does Bilqis, the Queen of Sheba, hide her real reason in coming to King Solomon’s court? How does her attitude towards Solomon change once she reveals her true purpose to him?

Why does Rehoboam hate Baalit? What does the incident of the cat reveal? What were his plans for Baalit when he eventually became king?

What was the significance of the ivory spindle? How did it reappear after being lost for so many years?

Who were Moonwind, Shams, and Uri? What did they represent to Baalit? How does Baalit endanger Uri?

Why did Baalit request the Lady Helike accompany her to Sheba? What was King Solomon’s reaction to Baalit’s request?

Why did Nikaulis turned back to remain with Benaiah? What were her plans thereafter?

The author says that Queen Michal forged King Solomon into a king who was “human fire and royal ice.” Which other characters fit that description?

Baalit says, “. . . all women and men are different—and they are all the same. Some would be happy anywhere, and some happy nowhere.” Do you think this is true? What lessons are there in this book for women today?