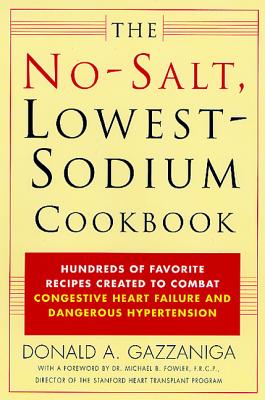 By Donald A. Gazzaniga, Michael B. Fowler (Introduction by)

Donald Gazzaniga, diagnosed with congestive heart failure, was headed for a heart transplant - the only effective medical treatment. Urged by his doctor to keep his sodium intake "under 1,500-2000 mg. a day," Don headed for the kitchen and went to work. Aware that cutting out table salt is the barest beginning of a true low-sodium diet, Don devised recipes for delicious low-sodium dishes that added up to less than 500 mg. daily, 70% lower than those in other low-sodium cookbooks. The result? Don's name has been removed from the transplant list and his doctors believe that his diet played a significant role.

This book is for informational purposes only. Readers are advised to consult a physician before making any major change in diet.

Don Gazzaniga retired from the communications industry a few years ago. Since he changed his diet to the very low-sodium dishes he has devised, he is again able to pursue his hobby of fishing as well as take moderate walks. He lives in Loomis, California.