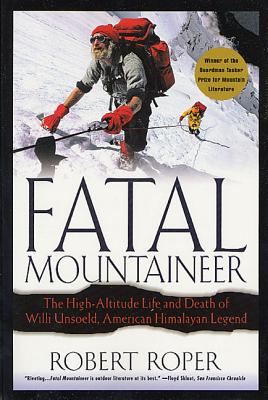 In 1963, Willi Unsoeld became an international hero for his conquest of the West Ridge of Everest. A charismatic professor of philosophy, Unsoeld was one of the greatest climbers of the twentiethth century, a man whose raw physical power and casual fearlessness inspired a generation of adventurers.

In 1976, during an expedition to Nanda Devi, the tallest peak in India, Unsoeld's philosophy of spiritual growth through mortal risk was tragically tested. The outcome of that expedition continues to fuel one of the most fascinating debates in mountaineering history.

Fatal Mountaineer is a gripping look at Willi Unsoeld and the epic climbs that defined him---a classic narrative blending action with ethics, fame with tragedy, a man's ambition with a father's anguish.

“Fatal Mountaineer...combines vivid characterization, gripping accounts of extreme mountaineering and accessible technical information, as well as pertinent cultural historical and philosophical reflection. It's a rich tapestry, a book for both the general reader and the climbing fanatic.” —Floyd Skloot, San Francisco Chronicle

“[A] cautionary tale of how pursuit of a mountain at any cost and in any weather can have deadly consequences.” —Lynn Arave, Deseret News (Salt Lake City, UT)

“With journalistic skill, Roper also delves into Unsoeld's transcendental philosophies and their fallacies...The book's greatest accomplishment is in the light it sheds on the shadows of mountain climbing and the impossible ideals of a hero.” —Mark Larabee, The Oregonian

Robert Roper has won awards for his fiction and nonfiction alike. His most recent book, Fatal Mountaineer, a biography of the American climber/philosopher, Willi Unsoeld, won the 2002 Boardman-Tasker Prize given by London's Royal Geographical Society. His works of fiction include Royo County, On Spider Creek, Mexico Days, The Trespassers, and Cuervo Tales; which was a New York Times Notable Book. He has won prizes or grants from the NEA, the Ingram-Merrill Foundation, the Joseph Henry Jackson Competition, and the British Alpine Club. His journalism appears in the New York Times, Los Angeles Times, Outside, Men's Journal, National Geographic, and others. He teaches writing and film at Johns Hopkins, and lives in Baltimore and northern California.
Loading...
or support indie stores by buying on