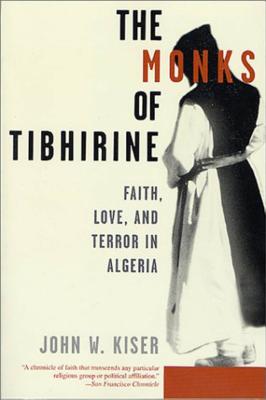 The Monks of Tibhirine

Faith, Love, and Terror in Algeria

The inspiration for the major motion picture "Of Gods and Men"

In the spring of l996 armed men broke into a Trappist monastery in war-torn Algeria and took seven monks hostage, pawns in a murky negotiation to free imprisoned terrorists. Two months later their severed heads were found in a tree; their bodies were never recovered.

The village of Tibhirine had sprung up around the monastery because it was a holy place protected by the Virgin Mary, revered by Christians and Muslims alike. But napalm, helicopters, and gunfire had become regular accompaniments to the monastic routine as the violence engulfing Algeria drew closer to the isolated cloister high in the Atlas Mountains.


Praise For The Monks of Tibhirine: Faith, Love, and Terror in Algeria…

“Kiser is the first American to have told the full story . . . What makes this book so unusual and yet useful for students is the way the author has combined solid research and profound analysis with compelling writing and personal engagement in the story. It is part mystery, part love story and part historical journalism of a very high order. There are precious few such books on the market. The Monks of Tibhirine brings together history, politics and stories of faith that is lived amid fear and violence in a style that is dramatic, inspiring and extremely educational. In this sense it is an excellent tool for teaching students about the Muslim world in which religion infuses life . . . This is an extraordinary story of the meeting of two peoples within the Abrahamic tradition who believed that, the violence notwithstanding, the destiny of all of them was to live together joined in charity and friendship. Kiser's book, as history and witness to faith, would be a valuable companion for many courses on religious studies, history and cultural studies of the Arab and Muslim worlds, but most of all for courses that seek to advance Christian Muslim understanding. I am going to be using it for my religion and conflict resolution course and am also recommending it as well to the Middle Eastern studies department.” —Andrea Bartoli, Director, Center for International Conflict Resolution, Columbia University

“Well-written and extremely thoroughly researched . . . A valuable addition to the literature about modern Algeria, and I plan to recommend it to all officers going there on assignment . . . Its story is couched within the larger--and tragic--setting of the country, and one can learn a lot about the latter by studying this case study.” —Peter Bechtold, Chair, Near East and North Africa, Foreign Service Institute

“Compelling . . . An exceptionally well-researched and deftly written account of the people and events involved in the tragedy.” —Colman McCarthy, The Washington Post Book World

“I teach a course in the history of the relations between Muslims and Christians, usually called 'Christians and the Challenge of Islam.' Usually the students are upper level undergraduates, with an occasional graduate student. For this audience The Monks of Tibhirine is a good assignment because it interweaves religious and monastic history with modern social and political issues in a context that can almost serve as the icon for the difficulties of Christian/Muslim relations in the the Islamic milieu in the contemporary period. The book is excitingly written in a way that carries the reader along with a yen to know how it all turns out. That's an important feature for any book one hopes an undergraduate will read. These are the reasons why I recommend the book to my students.” —Sidney H. Griffith, Professor of Syriac Patristics and Christian Arabic, Catholic University of America

“For those interested in Algeria, in Islamism and the disciplined spiritual life, this book is a must . . . Kiser makes the case that living together in community is possible for those religious peoples with an expansive inclusive understanding of their faiths; the Trappists had such a large attractive vision of Christianity . . . and large hearted Muslims met them half way.” —Gary Hamburg, professor of history, Notre Dame University

“Kiser's book addresses Christian-Muslim relations in both a personal and balanced way . . . It provides an important discussion of issues Algerians (and other Muslim countries) will have to deal with for generations to come. I would recommend The Monks of Tibhirine for use in classes.” —Sulayman Nyang, Howard University

“This book is not the first written about the monks of Tibhirine. It is the first written in English, but it might well be the best among all those books written in any language so far. I was struck by the accurate rendering of the portrait of each of the monks, by the description of both the local and national contexts of the events, by the depth of his comprehension of the Cistercian calling, and the vocation of our Algerian Church . . . Thank you to the author for the conscientiousness of his work and to have written about this drama in a way that it deserves.” —Father Gilles Nicolas, diocesan priest in Algiers

“Despite being a story of tragedy, The Monks of Tibhirine is ultimately an uplifting book and an educational one. Kiser offers lengthy carefully researched history of the political turmoil in Algeria and the on-going terrorist violence in the country.” —Carmela Ciuraru, The San Francisco Chronicle

“The riches contained in this book are many and varied . . . Chief among them may be the heightened appreciation that it offers for the rigors and allure of monasticism. Committed to lives of prayer and contemplation they became men of action summoned to achieve greatness and bravery under conditions of enormous duress. Life in what most of us call the 'real world,' appears pale by comparison.” —Andrew Bacevitch, Director, Center for International Relations, Boston University, author of First Things

“Kiser argues that this murderous incident was a breaking point in the war of Islamic radicals against Algeria's military government--it turned the majority of Algerians against the radicals . . . Mr. Kiser tells the story well, at once sad and inspiring, of very good men who took their vocation seriously and died for it.” —Roger Kaplan, The Wall Street Journal

“In the wake of the September terrorist attack on the United States, The Monks of Tibhirine gives us an essential lens through which to examine the violent forces rending the Muslim world. With deep compassion toward all parties to this tragic drama, John Kiser uses the story of these modern Christian monks to provide a microcosm of a struggle underway from Morocco to the Philippines. His book paints a surprising picture of the bonds of faith between Christians and Muslims, and provides a ray of hope for the future.” —Dan Morgan, senior editor, The Washington Post

“A must read shocker for those unaware of recent Algerian history. Beautifully written.” —William W. Warner, Winner of the Pulitzer Prize for Beautiful Swimmers

“I could not put this excellent book down. I took it everywhere I went and read it when I was stuck in traffic, waiting for an appointment, before going to bed. The book works on so many levels. The prior, Christian de Cherge articulated what I have been trying to convey--that Muslims intuitively view themselves as keepers of Christian and Jewish 'orthodoxy,' not in the contemporary, but in the historical sense. The Trappist superior was a mystical adventurer who was convinced that Muslims were saved by their Islam and that Islam had something to tell Christians. The book touched me deeply.” —Imam Feisal Abdul-Rauf, American Sufi Muslim Association

“I felt bereft when I finished . . . The Monks of Tibhirine is a well- researched, thoroughly engaging story of the Christian presence in Algeria today. This is an important book for the informed reader and for specialists interested in Islam, its relation to Christianity, and in the delicate dance of politics and religion in Muslim societies.” —Dawn Chatty, Dulverton Senior Research Fellow, International Development Center, Oxford University

“The Monks of Tibhirine is a work of great sensitivity . . . his insightful prose weaves complex themes from Algeria's history into a single life-affirming whole. It transforms tragedy into hope for the future of Christian-Muslim relations . . . Most inspiring!” —Abdul Aziz Said, Director, Center for Global Peace, American University

“An intellectual and emotional journey through the transcendent themes of faith, hate, war and reconciliation. The Monks of Tibhirine is not only a penetrating account of recent historical events, but of ideas and ideologies driving them.” —Susan Eisenhower, Director, Eisenhower Institute, editor Islam in Central Asia

“John Kiser's fascinating account of the 1996 brutal massacre of the seven trappist monks in Algeria is situated well in its historical context. The complexities of the relationship between the various factions of the Muslims and the Christian monks of French origin is presented here in a lucid and engaging way. Now at last we have complete understanding of this heart-rending tragedy of our times. Highly recommended.” —Brother Patrick Hart, O.C.S.O., Monk of Gethsemani and General Editor of the Thomas Merton Journals

“Can Christians and Muslims live together in peace and spiritual solidarity? Do these two spiritual traditions have anything to teach each other? The small Catholic monastery of Notre Dame de l'Atlas in Islamic Algeria stood as a witness proclaiming a bold yes to each of these questions . . . The French Trappists always stressed the 'notes that are in harmony' . . . Recommended for larger public libraries and academic libraries as well as special collections on Islam, monastic studies, and North Africa.” —Steve Young, McHenry City College, Crystal Lake Illinois, Library Journal

John Kiser is the author of Communist Entrepreneurs and Stefan Zweig: Death of a Modern Man. A former international technology broker, he now lives with his family in Sperryville, Virginia
Loading...
or support indie stores by buying on