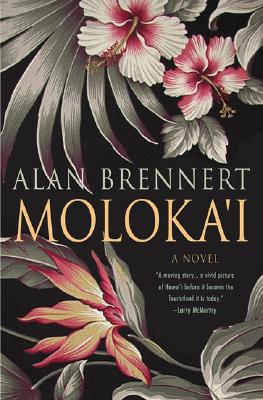 Young Rachel Kalama, growing up in idyllic Honolulu in the 1890s, is part of a big, loving Hawaiian family, and dreams of seeing the far-off lands that her father, a merchant seaman, often visits. But at the age of seven, Rachel and her dreams are shattered by the discovery that she has leprosy. Forcibly removed from her family, she is sent to Kalaupapa, the isolated leper colony on the island of Moloka'i.
In her exile she finds a family of friends to replace the family she's lost: a native healer, Haleola, who becomes her adopted "auntie" and makes Rachel aware of the rich culture and mythology of her people; Sister Mary Catherine Voorhies, one of the Franciscan sisters who care for young girls at Kalaupapa; and the beautiful, worldly Leilani, who harbors a surprising secret. At Kalaupapa she also meets the man she will one day marry.
True to historical accounts, "Moloka'i" is the story of an extraordinary human drama, the full scope and pathos of which has never been told before in fiction. But Rachel's life, though shadowed by disease, isolation, and tragedy, is also one of joy, courage, and dignity. This is a story about life, not death; hope, not despair. It is not about the failings of flesh, but the strength of the human spirit.

Alan Brennert is a novelist ("Time and Chance") as well as an Emmy Award-winning screenwriter ("L.A. Law"). He lives in Southern California, but his heart is in Hawai'i.
Loading...
or
Not Currently Available for Direct Purchase