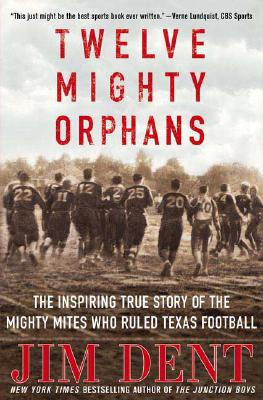 Jim Dent, author of the New York Times bestselling The Junction Boys, returns with his most powerful story of human courage and determination.
More than a century ago, a school was constructed in Fort Worth, Texas, for the purpose of housing and educating the orphans of Texas Freemasons. It was a humble project that for years existed quietly on a hillside east of town. Life at the Masonic Home was about to change, though, with the arrival of a lean, bespectacled coach by the name of Rusty Russell. Here was a man who could bring rain in the midst of a drought. Here was a man who, in virtually no time at all, brought the orphans' story into the homes of millions of Americans.
In the 1930s and 1940s, there was nothing bigger in Texas high school football than the Masonic Home Mighty Mites--a group of orphans bound together by hardship and death. These youngsters, in spite of being outweighed by at least thirty pounds per man, were the toughest football team around. They began with nothing--not even a football--yet in a few years were playing for the state championship on the highest level of Texas football. This is a winning tribute to a courageous band of underdogs from a time when America desperately needed fresh hope and big dreams.
The Mighty Mites remain a notable moment in the long history of American sports. Just as significant is the depth of the inspirational message. This is a profound lesson in fighting back and clinging to faith. The real winners in Texas high school football were not the kids from the biggest schools, or the ones wearing the most expensive uniforms. They were the scrawny kids from a tiny orphanage who wore scarred helmets and faded jerseys that did not match, kids coached by a devoted man who lived on peanuts and drove them around in a smoke-belching old truck.
In writing a story of unforgettable characters and great football, Jim Dent has come forward to reclaim his place as one of the top sports authors in America today.
A remarkable and inspirational story of an orphanage and the man who created one of the greatest football teams Texas has ever known . . . this is their story--the original Friday Night Lights. "This just might be the best sports book ever written. Jim Dent has crafted a story that will go down as one of the most artistic, one of the most unforgettable, and one of the most inspirational ever. Twelve Mighty Orphans will challenge Hoosiers as the feel-good sports story of our lifetime. Naturally, being from Texas, I am biased. Hooray for the Mighty Mites.''
--Verne Lundquist, CBS Sports

"Coach Rusty Russell and the Mighty Mites will steal your heart as they overcome every obstacle imaginable to become a respected football team. Take an orphanage, the Depression, and mix it with Texas high school football, and Jim Dent has authored another winner, this one about the ultimate underdog.''
--Brent Musburger, ABC Sports/ESPN

"No state has a roll call of legendary high school football stories like we do in Texas, and, admittedly, some of those stories have been 'expanded' over the years when it comes to the truth. But let Jim Dent tell you about the Mighty Mites of Masonic Home, the pride of Fort Worth in the dark days of the Depression. Read this book. You will think it's fiction. You will think it's a Hollywood script. But Twelve Mighty Orphans is the truth, and nothing but. It is powerful stuff. Some eighty years later, the Mighty Mites' story remains so sacred, not even a Texan would dare tamper with these facts. And Jim Dent tells it like it was."
-- Randy Galloway, columnist, Fort-Worth Star Telegram

"Dent builds a sense of drama and immediacy ... This is Seabiscuit for football fans, sure to attract narrative nonfiction fans who like to mix sports, inspiration, and popular history."--Booklist "The Mites’ story is inspiring."--Kirkus Reviews "Incredible story...Dent's strength is his play-by-play accounts of key games."--Publishers Weekly

Jim Dent, a longtime award-winning journalist who covered the Dallas Cowboys for eleven years in Fort Worth and Dallas, including a stint at the "Fort Worth Star-Telegram, " has written six books, including "The Junction Boys, " the "New York Times" bestseller that was the basis for an ESPN movie and remains a fan favorite. Dent lives in Nevada.
Loading...
or
Not Currently Available for Direct Purchase