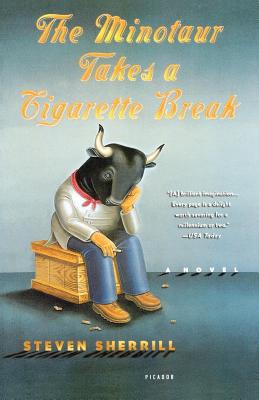 The Minotaur Takes a Cigarette Break

Five thousand years out of the Labyrinth, the Minotaur finds himself in the American South, living in a trailer park and working as a line cook at a steakhouse. No longer a devourer of human flesh, the Minotaur is a socially inept, lonely creature with very human needs. But over a two-week period, as his life dissolves into chaos, this broken and alienated immortal awakens to the possibility for happiness and to the capacity for love.


Praise For The Minotaur Takes a Cigarette Break: A Novel…

“[A] brilliant imagination...Every page is a delight worth savoring for a millennium or two.” —USA Today

“One of the most original and oddly moving novels in some time...funny, touching, haunting...If you don't fall under the spell of Sherrill's Minotaur, so human in his needs and longings, you probably should be tossed in the labyrinth yourself.” —The Charlotte Observer

“[A] comic, bittersweet first novel...Sherrill reveals himself as that most endangered of literary species, a crafty, talented novelist who's not afraid to show his heart.” —Chicago Tribune

Steven Sherrill is a graduate of the University of North Carolina at Charlotte and holds an M.F.A. in poetry from the Iowa Writers’ Workshop. The recipient of a Lila Wallace/ Reader’s Digest Fellowship, his poems and stories have appeared in Best American Poetry, Kenyon Review, and Georgia Review. He lives in Altoona, Pennsylvania.