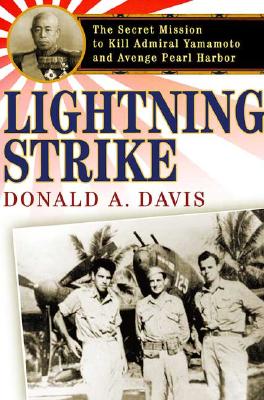 By Donald A. Davis

This is the story of the fighter mission that changed World War II.
It is the true story of the man behind Pearl Harbor---Admiral Isoroku Yamamoto---and the courageous young American fliers who flew the million-to-one suicide mission that shot him down.
Yamamoto was a cigar-smoking, poker-playing, English-speaking, Harvard-educated expert on America, and that intimate knowledge served him well as architect of the Japanese attack on Pearl Harbor. For the next sixteen months, this military genius, beloved by the Japanese people, lived up to his prediction that he would run wild in the Pacific Ocean. He was unable, however, to deal the fatal blow needed to knock America out of the war, and the shaken United States began its march to victory on the bloody island of Guadalcanal.
Donald A. Davis meticulously tracks Yamamoto's eventual rendezvous with death. After American code-breakers learned that the admiral would be vulnerable for a few hours, a desperate attempt was launched to bring him down. What was essentially a suicide mission fell to a handful of colorful and expendable U.S. Army pilots from Guadalcanal's battered "Cactus Air Force":

- Mississippian John Mitchell, after flunking the West Point entrance exam, entered the army as a buck private. Though not a "natural" as an aviator, he eventually became the highest-scoring army ace on Guadalcanal and the leader of the Yamamoto attack.
- Rex Barber grew up in the Oregon countryside and was the oldest surviving son in a tightly knit churchgoing family. A few weeks shy of his college graduation in 1940, the quiet Barber enlisted in the U.S. Army.
- "I'm going to be President of the United States," Tom Lanphier once told a friend. Lanphier was the son of a legendary fighter squadron commander and a dazzling storyteller. He viewed his chance at hero status as the start of a promising political career.
- December 7, 1941, found Besby Holmes on a Pearl Harbor airstrip, firing his .45 handgun at Japanese fighters. He couldn't get airborne in time to make a serious difference, but his chance would come.
- Tall and darkly handsome, Ray Hine used the call sign "Heathcliffe" because he resembled the brooding hero of Wuthering Heights. He was transferred to Guadalcanal just in time to participate in the Yamamoto mission---a mission from which he would never return.

They flew the longest over-water fighter mission ever and ambushed and killed Yamamoto. After his death, the Japanese never won another major naval battle. But the victorious American pilots seemed cursed by the samurai spirit of the admiral and were tormented for the rest of their lives by what happened that day.
Davis paints unforgettable personal portraits of men in combat and unravels a military mystery that has been covered up at the highest levels of government since the end of the war.

DONALD A. DAVIS is a former war correspondent and the author of fourteen books, including three New York Times bestsellers.

"Lightning Strike is the finest history of World War II in the Pacific, and especially the Yamamoto mission, that I have ever read."
---William H. Allen, president of the American Fighter Aces Association

"This is a rich slice of Pacific War history . . . Davis's account is replete with heroes, villains, and idiots. He asks all the right questions and comes up with most of the answers."
---Joseph L. Galloway, Senior Military Correspondent, Knight Ridder Newspapers, and coauthor of We Were Soldiers Once . . . and Young

"Fascinating history that reads like a detective novel. I'm green with envy."
---William Stevenson, author of A Man Called Intrepid

"I have long been fascinated by Yamamoto---his brilliant career as a strategist and as a warrior and his Wagnerian end as those American pilots hunted him to the death. . . . Davis fleshes out the dramatic story in splendid fashion."
---James Brady, Parade Magazine columnist and author of The Coldest War and The Marine

"Lightning Strike is a wonderful contribution to World War II history and a remarkable story, remarkably told, gripping and page-turning from start to finish. Davis has both a great sense of drama and a great lust for the truth."
---Craig Nelson, author of The First Heroes: The Extraordinary Story of the Doolittle Raid

"An enthralling book that yields new and surprising insights."
---Monika Jenson, former 60 Minutes producer and author of Spite House: The Last Secret of the Vietnam War

"Exquisitely researched and vividly narrated. Lightning Strike puts the reader in the cockpit. . . . Years of confusion shrouding the mission are finally swept away, deftly and conclusively."
---David A. Witts, author of Forgotten War, Forgiven Guilt: The 13th Air Force

"Lightning Strike is a crisp salute to some of the bravest pilots ever to fly in defense of the United States. Compelling and deeply human, by turns triumphant and profoundly sad, Don Davis's book sheds valuable new light on one of World War II's most pivotal fighter missions."
---James D. Hornfischer, author of The Last Stand of the Tin Can Sailors

"A terrific flying story and a great history, Lightning Strike strips away the legends and the lies to reveal who really shot down Admiral Yamamoto."
---Stephen Coonts

"Lightning Strike is an exciting, well-documented, and masterfully written story. Mr. Davis weaves together the various complex personalities and contradictory facts. . . . It was a delightful read for me, a guy who thought he knew all about the [Yamamoto] mission."
---Bob Manhan, executive director of the Veterans of Foreign Wars

"Lightning Strike is a truly wonderful history of the early days of World War II and the desperate fighting on Guadalcanal. The analysis of the air warfare and the great detail about the men who fought in the air in the Solomon Islands is brilliantly done."
---George Chandler, World War II Ace, Pacific Theater, and co-founder of the Second Yamamoto Mission Association