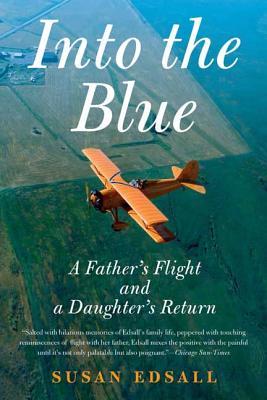 A Father's Flight and a Daughter's Return

The Chicago Sun Times praises "Into the Blue is Susan Edsall's fascinating chronicle of the fight to get her father back into his beloved Big Sky...an engagingly readable testament to an everyday courage....Salted with hilarious memories of Edsall family life, peppered with touching reminiscences of flight with her father, [Edsall] mixes the positive with the painful until it's not only palatable but also poignant."

Three years ago, Susan Edsall's father, a rebuilder and pilot of antique airplanes, suffered a devastating stroke that left him unable to read, write, speak, tell time, understand the alphabet---or fly. The doctors told Susan the best her family could hope for was that he would learn to play checkers. Susan knew if her dad couldn't fly, he'd just as soon not breathe, so she chose another path. Battling the pessimistic conclusion of the experts---and her own looming fears---she and her sister, Sharon, aka the Blister Sisters, decided to take matters into their own hands. With no medical training but double doses of determination, they bushwhacked their own rehab program and got their father back behind the controls of his beloved open-cockpit biplane and into the air.

Susan Edsall's Into the Blue is a powerful family memoir about two feisty sisters from Montana who bring their father back to life---and discover themselves in the process. Inspiring, gritty, and often hilarious, it's also the story of anyone who has ever fought back from a dire prognosis to pursue a cherished dream.


Praise For Into the Blue: A Father's Flight and a Daughter's Return…

“Into the Blue is an inspiring true story of love, courage and triumph. As Edsall brilliantly relates, life's toughest battles don't take place on a battlefield.” —Stephen Coonts, New York Times bestselling author of Liberty and Liars and Thieves

Susan Edsall, author of Into the Blue: A Father's Flight and a Daughter's Return, took her first airplane flight with her dad when she was four years old. A pilot herself, she lives with her husband in Vershire, Vermont, and still flies regularly with her father in Montana.
Loading...
or support indie stores by buying on