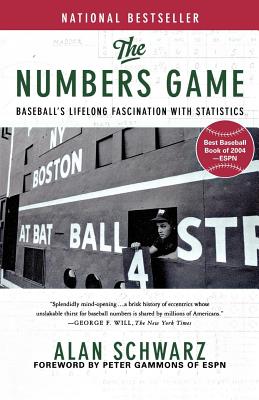 Most baseball fans, players and even team executives assume that the national pastime's infatuation with statistics is simply a by-product of the information age, a phenomenon that blossomed only after the arrival of Bill James and computers in the 1980s. They couldn't be more wrong.

In this award-winning book, Alan Schwarz - whom bestselling Moneyball author Michael Lewis calls "one of today's best baseball journalists" - provides the first-ever history of baseball statistics, showing how baseball and its numbers have been inseparable ever since the pastime's birth in 1845. He tells the history of this obsession through the lives of the people who felt it most: Henry Chadwick, the 19th-century writer who invented the first box score and harped endlessly about which statistics mattered and which did not; Allan Roth, Branch Rickey's right-hand numbers man with the late-1940s Brooklyn Dodgers; Earnshaw Cook, a scientist and Manhattan Project veteran who retired to pursue inventing the perfect baseball statistic; John Dewan, a former Strat-O-Matic maven who built STATS Inc. into a multimillion-dollar powerhouse for statistics over the Internet; and dozens more.

Schwarz paints a history not just of baseball statistics, but of the soul of the sport itself. Named as ESPN's 2004 Baseball Book of the Year, The Numbers Game will be an invaluable part of any fan's library and go down as one of the sport's classic books.


Praise For The Numbers Game: Baseball's Lifelong Fascination with Statistics…

“One of the most engrossing histories of baseball ever.” —From the Foreword by Peter Gammons

“The pastime behind the national pastime . . . a very human look at generations of baseball fanatics.” —The Philadelphia Inquirer

“A riveting history of the search for new baseball knowledge.” —Michael Lewis, author of Moneyball

“The language of baseball is statistics, and Alan Schwarz gives us an unprecedented look at one of the world's great romance languages. Schwarz deftly illuminates the history and relevance of baseball statistics and is at the tops of his game introducing the people behind the numbers.” —Tom Verducci, Sports Illustrated

“Alan Schwarz makes statistics as interesting as games and the people who play them. Who knew that numbers could have such personality?” —Sally Jenkins, author of Funny Cide and the bestselling It's Not About the Bike

“One of the very best baseball journalists working today, (Schwarz) has written a wonderful history that will appeal even to those with no particular interest in the game . . . Remarkable.” —The New York Observer

“An enormously entertaining and engrossing book that should be read by everyone.” —The Seattle Times

“An essential book for any baseball library, one that simultaneously makes for breezy reading and holds up as an essential piece of research.” —The Chicago Sports Review

“Reads like a whodunit . . . with a season-full of heretofore under-reported facts, nuances and stories.” —Long Beach Press-Telegram

“Alan Schwarz turns the numbers of baseball into musical notes. He makes you understand them, he makes you care about them, and in the end, he makes you share his passion for them.” —Mike Lupica, New York Daily News

Alan Schwarz is the Senior Writer of Baseball America magazine, a weekly columnist for ESPN.com, and a frequent contributor to The New York Times. His work has appeared in Newsweek, The Wall Street Journal, and more than a dozen other national publications. He is the author of The Numbers Game. He lives in Manhattan.
Loading...
or support indie stores by buying on