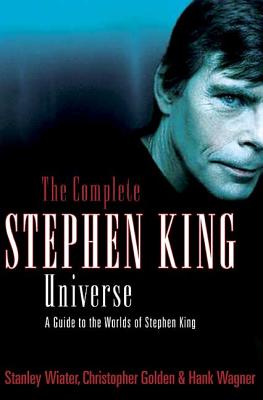 A Guide to the Worlds of Stephen King

The myriad worlds and universes King has created are, in reality, one world, one universe. Here is the guide to that universe.
The Complete Stephen King Universe is the only definitive reference work that examines all of Stephen King's novels, short stories, motion pictures, miniseries, and teleplays, and deciphers the threads that exist in all of his work. This ultimate resource includes in-depth story analyses, character breakdowns, little-known facts, and startling revelations on how the plots, themes, characters, and conflicts intertwine.
After discovering The Complete Stephen King Universe, you will never read Stephen King the same way again.

“This book might be one of the single most important books about Stephen King ever written. . . . Beginning with the premise that all of King's work is intertwined in an intricate weave of overlapping narrative threads, with the world of the Dark Tower as the linchpin around which everything else orbits, Wiater, Golden, and Wagner carefully prove their point, in an entertaining, intriguing, and thoroughly indisputable way.” —Stephen Spignesi, author of The Essential Stephen King

“Here is the Stephen King companion to end all Stephen King companions . . . The three authors bring their considerable expertise to a survey of the complete King fictional corpus, grouping novels and tales by setting and theme. An indispensable insider's guide to the influences on King, his plots and characters, TV and film adaptations, and more.” —Publishers Weekly

Stanley Wiater has been interviewing and writing about Stephen King for more than two decades. The award-winning author or editor of ten books, he is currently the writer and host of the television series Dark Dreamers, which showcases those who explore the dark side of the arts.

CHRISTOPHER GOLDEN is the New York Times bestselling and Bram Stoker award-winning author of Ararat, Snowblind, Dead Ringers, and Of Saints and Shadows, among many other novels. With Mike Mignola, he is the co-creator of two cult favorite comic book series, Baltimore and Joe Golem: Occult Detective. Golden is also the editor of such anthologies as Seize the Night, The New Dead, and Dark Cities, and the co-host of the popular podcast "Three Guys with Beards." He lives in Massachusetts.

Hank Wagner is a respected critic and journalist. Among the many publications in which his work regularly appears are Cemetery Dance and Mystery Scene.
Loading...
or support indie stores by buying on