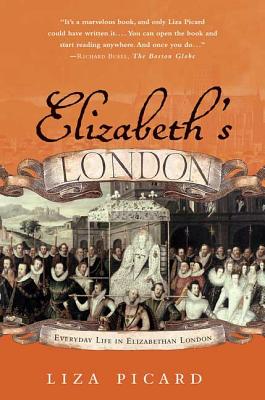 This picture of the London of Queen Elizabeth (1558-1603) is the result of Liza Picard's curiosity about the practical details of daily life that almost every history book ignores. As seen in her two previous, highly acclaimed books-Restoration London and Dr. Johnson's London-she has immersed herself in contemporary sources of every kind. She begins with the River Thames, the lifeblood of Elizabethan London. The city, on the north bank of the river, was still largely confined within old Roman walls. Upriver at Westminster were the royal palaces, and between them and the crowded city the mansions of the great and the good commanded the river frontage. She shows us the interior décor of the rich and the not-so-rich, and what they were likely to be growing in their gardens. Then the Londoners of the time take the stage, in all their amazing finery. Plague, small-pox, and other diseases afflicted them. But food and drink, sex and marriage and family life provided comfort, a good education was always useful, and cares could be forgotten in a playhouse or the bear-baiting rings, or watching a good cockfight. Liza Picard's wonderfully skillful and vivid evocation of the London of four hundred years ago enables us to share the delights, as well as the horrors, of the everyday lives of sixteenth century Britain.

Liza Picard was born in 1927. She read law at the London School of Economics and was called to the Bar by Gray's Inn, but did not practice. She worked in London for many years in the office of the Solicitor of Inland Revenue until she retired in 1987. She now lives in Oxford. Picard is the author of the critically acclaimed Elizabeth's London, Restoration London and Dr. Johnson's London.
Loading...
or
Not Currently Available for Direct Purchase