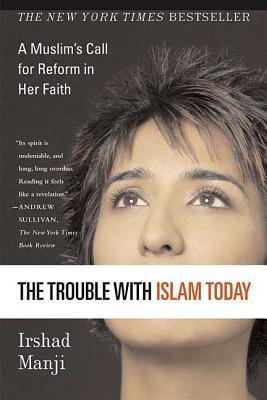 The Trouble with Islam Today

A Muslim's Call for Reform in Her Faith

"I have to be honest with you. Islam is on very thin ice with me.... Through our screaming self-pity and our conspicuous silences, we Muslims are conspiring against ourselves. We're in crisis and we're dragging the rest of the world with us. If ever there was a moment for an Islamic reformation, it's now. For the love of God, what are we doing about it?"

In this open letter, Irshad Manji unearths the troubling cornerstones of mainstream Islam today: tribal insularity, deep-seated anti-Semitism, and an uncritical acceptance of the Koran as the final, and therefore superior, manifesto of God's will. But her message is ultimately positive. She offers a practical vision of how Islam can undergo a reformation that empowers women, promotes respect for religious minorities, and fosters a competition of ideas. Her vision revives "ijtihad," Islam's lost tradition of independent thinking. In that spirit, Irshad has a refreshing challenge for both Muslims and non-Muslims: Don't silence yourselves. Ask questions---out loud. The Trouble with Islam Today is a clarion call for a fatwa-free future.


Praise For The Trouble with Islam Today: A Muslim's Call for Reform in Her Faith…

“Irshad Manji is a fresh, new and intriguing voice of Islamic reform. This wonderfully written book will surprise you, educate you, even entertain you.” —Alan Dershowitz, author of The Case for Israel

“The Trouble with Islam is beyond controversial. It may ignite a firestorm of protest...her easy conversational style, addressed to 'my fellow Muslims,' makes it accessible to a wide range of readers.” —Leslie Scrivener, The Toronto Star

Recipient of Oprah Winfrey’s first Chutzpah Award for boldness, Irshad Manji is the founder of Moral Courage College, which teaches people how to do the right thing in the face of fear. She is also the Director for Courage, Curiosity, and Character at Let Grow, a nonprofit promoting independence and resilience in kids. A prize-winning professor, Manji currently lectures with Oxford University’s Initiative for Global Ethics and Human Rights.
Loading...
or support indie stores by buying on