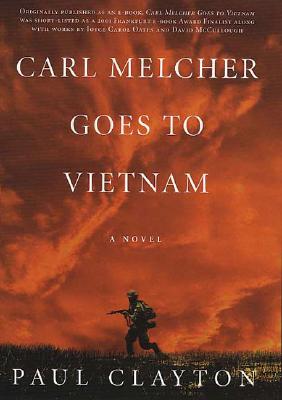 The year is 1968. Like thousands of other American boys, Carl Melcher is drafted and sent to Vietnam. His new company is infected with the same racial tensions plaguing the nation. Despite that, Carl makes friends on both sides of the color line. The war, like a tiger lurking in the bushes, picks off its victims one by one. Naively over-optimistic, Carl believes that karma and good intentions will save him and his friends. Then fate intervenes to teach Carl something of the meaning of life, and death.

"Echoes of Joseph Heller's CATCH-22, written about an earlier war, are seen in the surrealism of the scene, which Carl himself describes as a comic book cutout, a brutal illumination of his childhood games."
- KnowBetter.com

"Drawn from the author's own experience as an Army soldier in Vietnam, Clayton deftly portrays an innocent abroad in the development of his protagonist, the likable but naive Carl Melcher."
- BookPage

Paul Clayton was born in 1948, drafted in 1968, and sent to Vietnam in September of that year. He served with an infantry line company in the 4th Infantry Division in the Central Highlands of Pleiku Province. After the army, Clayton went to Temple University in Philadelphia where he received a Bachelor of Arts degree in English Literature in 1976. He currently lives and works in California.

Distracted by his emotional pain and his immature fantasies, Carl’s mind is not on his job, and one could argue that he is not a very effec­tive soldier. In fact, Carl even (jokingly?) suggests that the war is not real. Would more training have made Carl a better soldier? And what form would that training take—physical, emotional, or mental?

Discuss the two alpha males in the squad, Ron and Glock. What are their attitudes about life and the war in Vietnam, and how were they formed? And whose attitude, Ron’s or Glock’s, prevails in the squad, and why?

There was much debate in America over the war in Vietnam. Where in the novel is that addressed?

Discuss Mike’s death by friendly fire. Whose fault was it? Can these things ever be eliminated?

Discuss the death of the PAVN medic. Was there anything unusual about this action? What does this scene reveal about the characters?

Discuss the final scenes in the hospital and Carl’s friendship with Greg Mills and Jack Krouse. The most troubled character here seems to be Krouse; the most balanced, Mills. Carl seems to be somewhere in between. With which character did you most identify? Why?

What has Carl learned by the end of the novel? Are these “lessons” true only in relation to the Vietnam war, or do they apply to all wars?

How much of the book do you think is autobiographical?

“War is hell,” the saying goes, and much has been written about the behavior of young men during war. Based on your reading of the novel and your discussions with others, what do you think about the morality and behavior of these American soldiers in comparison with the soldiers of other nations?

The majority of soldiers in the field during the Vietnam War were draftees. Career soldiers and National guard units are fighting the current war in Iraq and Afghanistan. Which do you think is more effective and why? Do you think the draft will ever be re-instated?