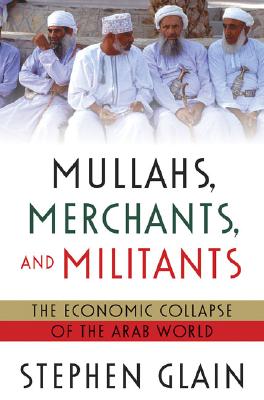 The Economic Collapse of the Arab World

A thousand years ago, a vast Arab empire stretched from the Asian steppe across the Mediterranean to Spain, pioneering new technologies, sciences, art and culture. Arab traders and Arab currencies dominated the global economy in ways Western multinationals and the dollar do today.

A thousand years later, Arab states are in decay. Official corruption and ineptitude have eroded state authority and created a vacuum that militant Islam has rushed to fill. Glain takes us on a journey through the heart of what were once the great Islamic caliphates, the countries now known as Lebanon, Syria, Jordan, Israel/Palestine, Iraq and Egypt, to illustrate how a once prosperous and enlightened civilization finds itself at a crossroads between a Dark Age and a New Dawn.

As late as a century ago, what we call the Levant was a prosperous trading bloc. By carving the region into proxy states and emirates after the First World War, the Western powers Balkanized and undermined the Levantine economy. That in turn prepared the ground for a regional autocracy that rejected economic openness and religious tolerance, qualities that had made the old Islamic caliphates great. Today the Arab world has opted out of the global economy, with tragic consequences. It is up to the new generation of leaders -- and the Western governments that created the modern Middle East -- to reverse the sclerosis and revive the region.

Praise For Mullahs, Merchants, and Militants: The Economic Collapse of the Arab World…

"Steve Glain has written a wonderful book about the Middle East; beautifully written and well-reported. A shelf full of other books have explained the politics and religious tensions of the region, but none have taken Glain's holistic approach to incorporate... an understanding of how the economies of Middle Eastern countries have also contributed to the region's malaise. This approach does much to help our understanding of the countries that Glain has done such stellar reporting from: Egypt, Jordan, Lebanon, Syria and Iraq."
- Peter Bergen, bestselling author of Holy War, Inc.: Inside the Secret World of Osama Bin Laden

Stephen Glain joined "The Wall Street Journal" in 1991. From 1998 to 2001, he was the Journal's Middle East correspondent, based in Amman, Jordan. He now covers the Middle East for "The Boston Globe."
Loading...
or
Not Currently Available for Direct Purchase