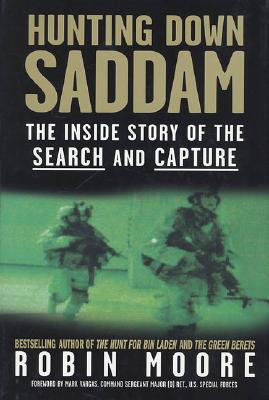 The Inside Story of the Search and Capture

This authoritative and gripping narrative plunges the American public into the real and personal story of the United States forces in Iraq, and their successful maneuvers in capturing one of the most vicious dictators of our time.
"Hunting Down Saddam" contains up-to-the-minute material and provides never-before-heard accounts of the triumphs and frustrations, strategies and attacks, of those who put their lives at risk to track down Saddam Hussein.
* The first book to tell the whole story of the pursuit of Saddam, from pre-war to his capture.
* Candid accounts straight from the soldiers on the frontline, which have not been sanitized or filtered through the media, the military, or the Pentagon.
* Exclusive interviews with key military leaders, including Colonel "Smokin' Joe" Anderson, Commanding Officer of the 2nd Brigade, 101st Airborne (Screaming Eagles), who led the attack on Saddam's sons.
The capture of Saddam Hussein is the defining event for this generation's military. Action-packed and controversial, "Hunting Down Saddam" teems with inside information. Robin Moore gets the real story from these fighting men as only he can.
Doris Kearns Goodwin calls "Hunting Down Saddam," "A fast and furious read . . . when the historians try to put together the real facts of the two wars the U. S. has fought since September 11, 2001 this book will be a valuable contribution to their research."


Praise For Hunting Down Saddam: The Inside Story of the Search and Capture…

"A fast and furious read . . . when the historians try to put together the real facts of the two wars the U. S. has fought since September 11, 2001 this book will be a valuable contribution to their research."
- Doris Kearns Goodwin

Robin Moore won the admiration of the Green Berets forty years ago during the Vietnam War. That admiration has not flagged with a new generation of soldiers. To this day, Moore receives letters from enlisted men who say the book "The Green Berets" motivated their career in the Special Forces. A nose gunner (B-17) in World War II, Robin Moore spent his seventy-eighth birthday in Iraq, interviewing troops for "Hunting Down Saddam." When not in war zones or on army bases, he makes his home in Concord, Massachusetts.
Loading...
or
Not Currently Available for Direct Purchase