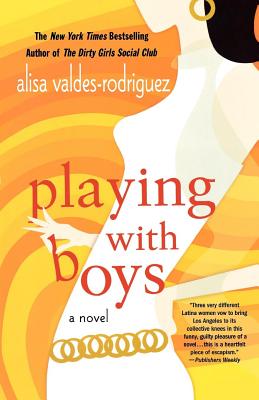 From the author of The Dirty Girls Social Club comes another fast, funny, soulful, and sexy novel about friendship and love amid Latinas.

It's a jungle out there -- in Los Angeles, that is, where the tangle of freeways and ingrained insincerity can make a girl feel very alone, no matter how fabulous the weather or how cute the clothes at the South Coast Plaza mall. With very different styles and attitudes, Marcella, Olivia, and Alexis are trying to crack the code in L.A, trying to snare love and success. But first they have to come together—to make their marks and plan the fun they're going to have along the way.

Marcella is a hot, sharp young television actress who's barely able to enjoy the life she's bought for herself and certainly isn't enjoying her body, which is never quite perfect enough. Olivia, whose life revolves around her toddler son, Jack, is tethered to her suburban mommy track so tightly she can almost forget the horrible thing that happened to her family when she was a child herself. Alexis is a musicians' manager with a smart mouth, an ample body, and loads of style but barely enough self-esteem to fill a Prada card case. And the boys in their lives? Marcella's had about enough of them throwing themselves at her; Olivia's boy is her son; and Alexis is still searching, not for a boy this time, but for a man.

Playing with Boys is a savvy novel with charm, style, and heart to spare.


Praise For Playing with Boys: A Novel…

“Three very different Latina women vow to bring Los Angeles to its collective knees in this funny, guilty pleasure of a novel . . . [A] heartfelt piece of escapism.” —Publishers Weekly

"Playing with Boys is a testament to the powers of women wrapped up in a pretty Cinderella story times three.” —Albuquerque Journal

“A beach read that . . . might make you giggle and blush.” —Chicago Sun-Times

“As Marcella, Alexis, and Olivia grapple with men and their careers, they really don't seem all that different from Bridget Jones herself.” —Miami Herald

“The three amigas--a television actress, a single mother, and a manager of musicians--each has her own distinct lifestyle, quirks, and notions of romance, yet each manages to help her friends find balance, along with loads of good times.” —Sacramento Bee

“If you're looking for a great beach listen, The Dirty Girls Social Club is just what the audio doctor ordered.” —Bookpage

“[Valdes-Rodriguez] speaks in the accent and personality of each character and is completely convincing. [She] is not only someone to watch, but someone to hear.” —Memphis Commercial Appeal