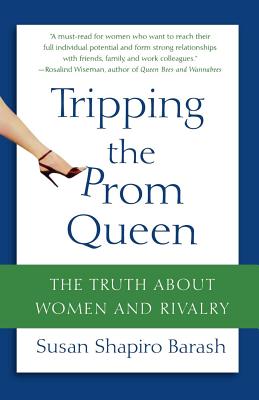 The Truth About Women and Rivalry

Tripping the Prom Queen is a groundbreaking investigation into the dark secret of female friendship: rivalry.

Susan Shapiro Barash has exploded the myth that women help one another, are supportive of one another, and want each other to succeed. Based on interviews with women across a broad social spectrum, she has discovered that the competition between women is more vicious precisely because it is covert. She tells us:
* Why women can't and won't admit to rivalry.
* How women are trained from an early age to compete with one another.
* In which areas women most heatedly compete.
* How rivalry is different among women than among men.
* The differences between competition, envy, and jealousy.
* When competition is healthy and when it isn't.
* Why women find it irresistible to "trip the prom queen."
* Useful strategies to stop the competition and forge a new kind of relationship with other women.
Whether you've tripped the prom queen or been tripped yourself, you will discover an engrossing exploration of this female phenomenon, as well as a beacon of hope for better, more fulfilling relationships.


Praise For Tripping the Prom Queen: The Truth About Women and Rivalry…

“A must-read.” —Rosalind Wiseman, author of Queen Bees And Wannabees

SUSAN SHAPIRO BARASH is an established writer of nonfiction women’s issue books and has written more than a dozen books, including The Nine Phases of Marriage; Toxic Friends; Little White Lies, Deep Dark Secrets and Tripping the Prom Queen. She teaches gender studies at Marymount Manhattan College. A well-recognized gender expert, she is frequently sought out by newspapers, televisions shows, and radio programs to comment on women’s issues. She also blogs for The Huffington Post and Psychology Today. She lives in New York City.
Loading...
or support indie stores by buying on