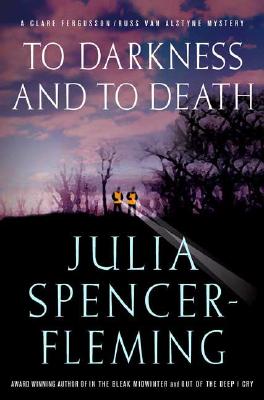 To Darkness and to Death (Hardcover)

In the small Adirondack town of Millers Kill, an old lumberman sits in the dark with his gun across his knees. Not far away, an unemployed logger sleeps off his bender from the night before. The owner of the town's last paper mill tosses in his bed. And a young woman, one of three heirs to the 250,000-acre Great Camp, wakes alone in darkness, bound and gagged.
Chief of Police Russ Van Alstyne wants nothing more than a quiet day of hunting in the mountains on his fiftieth birthday. His wife needs to have the town's new luxury resort ready for its gala opening night. The Reverend Clare Fergusson expects to spend the day getting St. Alban's Church ready for the bishop's annual visit. Her long-distance suitor from New York expects some answers about their relationship during his weekend in town.

In Millers Kill, where everyone knows everyone and all are part of an interconnected web of blood or acquaintance, one person's troubles have a way of ensnaring others. What begins as a simple case of a woman lost in the woods leads to a tangle of revenge, blackmail, assault, kidnapping, and murder. As the hours tick by, Russ and Clare struggle to make sense of their town's plunge into chaos---and their own chaotic emotions.

Something terrible waits in the ice-rimed mountains cradling Millers Kill. Something that won't be content with just one death---or two. . .

Julia Spencer-Fleming continues her moving story of the way a small town, as well as a great city, can harbor evil, and the struggle of two honest people to deal with the ever-present threat of their feelings for one another.

Julia Spencer-Fleming was born at Plattsburgh Air Force Base and spent most of her childhood on the move as an army brat. She studied acting and history at Ithaca College and received her J.D. from the University of Maine School of Law. She lives in a 185-year-old farmhouse outside of Portland, Maine, with three children, two dogs, and one husband.

Praise For To Darkness and to Death: A Clare Fergusson and Russ Van Alstyne Mystery…

“Clare Fergusson and Russ Van Alstyne make a fresh and unusual detective partnership, and I always welcome Clare’s impetuous but wise take on the world around her.”—Sara Paretsky, author of the V. I. Warshawski novels

“Add harrowing tension à la TV’s 24 to Julia Spencer-Fleming’s always lyrical prose and beautifully drawn characters, and you have one of the year’s must-reads! Spencer-Fleming has topped an already shining series with this fourth outing.”—Deborah Crombie, award-winning author of Dreaming of the Bones and In a Dark House

"A Rube Goldberg plot that crams all manner of secrets and crimes into the most hectic 21 hours in Millers Kill's history...the results show that God has both endless compassion for mortal screw-ups—and a terrific sense of humor."—Kirkus Reviews (starred review)

"A rich and fulfilling story...time spent with these characters is to be cherished."—Chicago Sun-Times

"Disparate elements fuse with elegant plotting...Spencer Fleming parcels out the excitement until the stunning conclusion. She also continues her sensitive handling of the tension between Clare and the very married chief of police she's fallen in love with."—Rocky Mountain News (Grade: A)

"Spencer-Fleming makes effective use of her vividly realized Adirondack setting, and she keeps the story moving at a good clip...the fourth installment in a satisfying series."—Booklist