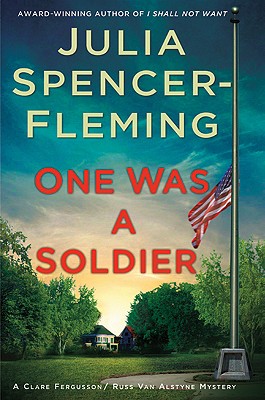 One Was a Soldier

On a warm September evening in the Millers Kill community center, five veterans sit down in rickety chairs to try to make sense of their experiences in Iraq. What they will find is murder, conspiracy, and the unbreakable ties that bind them to one another and their small Adirondack town.

The Rev. Clare Fergusson wants to forget the things she saw as a combat helicopter pilot and concentrate on her relationship with Chief of Police Russ Van Alstyne. MP Eric McCrea needs to control the explosive anger threatening his job as a police officer. Will Ellis, high school track star, faces the reality of life as a double amputee. Orthopedist Trip Stillman is denying the extent of  his traumatic brain injury. And bookkeeper Tally McNabb wrestles with guilt over the in-country affair that may derail her marriage.

But coming home is harder than it looks. One vet will struggle with drugs and alcohol. One will lose his family and friends. One will die.

Since their first meeting, Russ and Clare's bond has been tried, torn, and forged by adversity. But when he rules the veteran's death a suicide, she violently rejects his verdict, drawing the surviving vets into an unorthodox investigation that threatens jobs, relationships, and her own future with Russ.

As the days cool and the nights grow longer, they will uncover a trail of deceit that runs from their tiny town to the upper ranks of the U.S. Army, and from the waters of the Millers Kill to the unforgiving streets of Baghdad.

One Was a Soldier is "a surefire winner" (Booklist) and "Outstanding" (Library Journal)--Julia Spencer-Fleming at her best.


Praise For One Was a Soldier: A Clare Fergusson and Russ Van Alstyne Mystery…

“Julia Spencer-Fleming is a rarity in this business, a risk taker and a writer of deep feeling. Few others could deliver a high-concept thriller that so perfectly captures the subtle sufferings of soldiers home from combat. A story of greed, betrayal, and wounded love, One Was a Soldier left me entertained, satisfied, and a shade wiser about the cost of war.” --New York Times bestselling author John Hart

“This is a surefire winner, taking the linchpin Fergusson–Van Alstyne relationship to a new level, probing the personal lives of other members of the town’s police department, and personalizing the toll taken by war. Spencer-Fleming’s fans who have been waiting eagerly for her latest won’t be disappointed; this series, as intelligent as it is enthralling, just keeps getting better.” --Booklist (starred review)

“Explor[es] the inescapable legacies of soldiers come home, including a crushing burden of imagined, and unimaginable, guilt.” --Kirkus Reviews


“In the hands of a lesser writer, this novel would not fly, but Spencer-Fleming carries it off and concludes with a believable resolution. Outstanding.” --Library Journal (starred review)

JULIA SPENCER-FLEMING is an Agatha, Anthony, Barry, Dilys, Gumshoe and Macavity Award winner. She studied Acting and History at Ithaca College and received her J.D. at the University of Maine School of Law. Her books have been shortlisted for the Edgar, and Romantic Times RC awards. Julia lives in a 190-year-old farmhouse in Buxton, Maine with her husband and three children.
Loading...
or
Not Currently Available for Direct Purchase