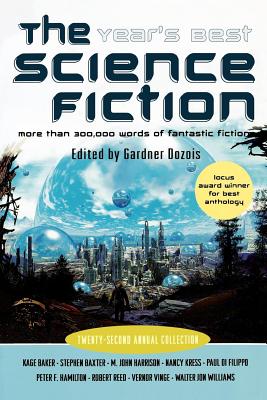 Widely regarded as the one essential book for every science fiction fan, The Year's Best Science Fiction (Winner of the 2004 Locus Award for Best Anthology) continues to uphold its standard of excellence with more than two dozen stories representing the previous year's best SF writing.

The stories in this collection imaginatively take readers far across the universe, into the very core of their beings, to the realm of the Gods, and to the moment just after now. Included are the works of masters of the form and the bright new talents of tomorrow. This book is a valuable resource in addition to serving as the single best place in the universe to find stories that stir the imagination and the heart.

“The latest in Dozois's definitive, must-read short story anthology series takes the pulse of science fiction today, revealing it to be a genre of breathtaking scope and imagination…. The range of stories and styles means there's something here for everyone.” —Publishers Weekly (Starred Review)