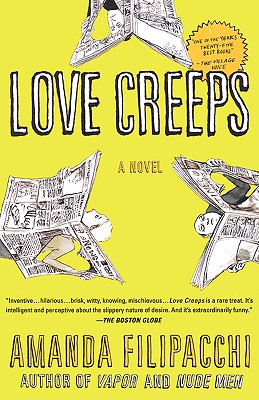 At the age of thirty-two, Lynn Gallagher, a successful Manhattan gallery owner, suddenly finds herself wanting nothing.  She has never before wanted nothing, and she misses wanting.  No one around her wants nothing.  She becomes envious of everyone who wants -- especially her stalker, Alan Morton, who wants her very badly. Because she envies Alan, Lynn decides to copy him.  And that is why, thirty-seven minutes later, she starts stalking Roland Dupont.
Amanda Filipacchi's hilarious and provocative novel introduces us to a new kind of love triangle - in which passions are fluid, motives are dubious and the chance for a genuine connection is always breathing down your neck.

"With a flair for delightfully silly dialogue, Filipacchi's third novel portrays romance as the tricky, prickly game that it is." --THE VILLAGE VOICE

"A fast-moving surrealistic sex farce about fear, seduction and stalking in Manhattan--a place where everybody is spying on everybody else--that's part suspense comedy and part philosophical treatise on the neurosis of love. This is, by far, Amanda Filipacchi's funniest and most accomplished novel."  --Bret Easton Ellis, author of American Psycho

Born in Paris, Amanda Filipacchi was educated in both France and the US and has lived in New York since the age of 17. She earned an MFA from Columbia University and is the author of two previous novels, "Nude Men" and "Vapor," both of which received widespread US and international acclaim. Her work has been published in France, the Netherlands, Italy, England, Germany, Russia, Israel, Poland, Turkey, Slovakia, Sweden, Hungary and Denmark. Film rights for" Love Creeps" have been purchased by United Artists for Single Cell Pictures.
Loading...
or
Not Currently Available for Direct Purchase