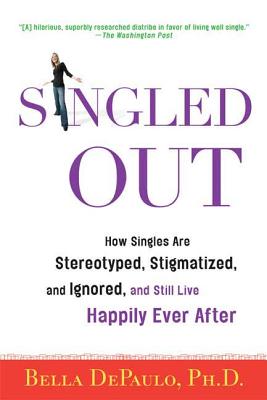 How Singles Are Stereotyped, Stigmatized, and Ignored, and Still Live Happily Ever After

Drawing from decades of scientific research and stacks of stories from the front lines of singlehood, Bella DePaulo debunks the myths of singledom---and shows that just about everything you've heard about the benefits of getting married and the perils of staying single are grossly exaggerated or just plain wrong. Although singles are singled out for unfair treatment by the workplace, the marketplace, and the federal tax structure, they are not simply victims of this singlism--single people really are living happily ever after.

"Elegant analysis, wonderfully detailed examples, and clear and witty prose…A must-read for all single adults, their friends and families, as well as social scientists and policy advocates."
--E. Kay Trimberger, author of The New Single Woman

"The singles movement is coming to a bookstore near you."
--Associated Press

"Fascinating . .this book could hardly have come at a better time. As much as societal adulation of the couple discriminates against single people, Singled Out suggests that it can also undermine marriage."
--The Christian Science Monitor

Bella DePaulo, Ph.D., is a social psychologist who did her graduate work at Harvard. She is the author of Singled Out and a visiting professor at the University of California at Santa Barbara. She lives in Summerland, California.

Praise For Singled Out: How Singles Are Stereotyped, Stigmatized, and Ignored, and Still Live Happily Ever After…

“Singled Out may be the single most important book you buy this year.” —Bookworm Sez

“Gleefully debunks a number of sad-sack "facts." According to DePaulo's myth-busting research, [singles] are every bit as happy, healthy, and long-lived as couples.” —Seattle Metropolitan

“If you're sick of your family asking, "So when are you gonna settle down?" or your boss saddling you with a fatter workload than your married coworkers, you will love Dr. Bella DePaulo's insightful, irreverent book.” —Michelle Goodman, author of The Anti 9-to-5 Guide

“Intriguing cultural study . . .DePaulo has given this complicated subject the attention and respect it deserves.” —Publisher’s Weekly

“DePaulo dismantles [a few other] claims of the pro-marriage lobby.” —Windy City Times

“She has a message for singles and couples alike: If you forget about your nonromantic relationships, you're missing out on a whole lot of love.” —Santa Barbara News-Press

“[Shows that singles] can be as productive, charming, fun, moral, and wise as their coupled counterparts” —Virginia Quarterly Review

“DePaulo combines her training as a social psychologist with wit and sharp analysis, bringing the entire "marriage is better" argument down like a house of cards.” —Windy City Times