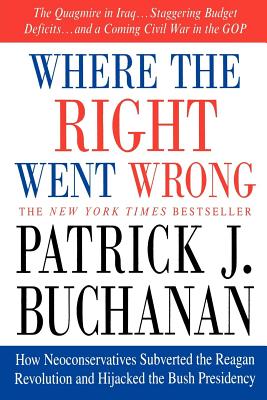 Where the Right Went Wrong (Paperback)

How Neoconservatives Subverted the Reagan Revolution and Hijacked the Bush Presidency

American Empire is at its apex. We are the sole superpower with no potential challenger for a generation. We can reach any point on the globe with our cruise missiles and smart bombs and our culture penetrates every nook and cranny of the global village. Yet we are now the most hated country on earth, buried beneath a mountain of debt and morally bankrupt.

Where the Right Went Wrong chronicles how the Bush administration and Beltway conservatives have abandoned their principles, and how a tiny cabal hijacked U. S. foreign policy, and may have ignited a "war of civilizations" with the Islamic world that will leave America's military mired down in Middle East wars for years to come.

At the same time, these Republicans have sacrificed the American worker on the altar of free trade and discarded the beliefs of Taft, Goldwater and Reagan to become a party of Big Government that sells its soul to the highest bidder.

A damning portrait of the present masters of the GOP, Where the Right Went Wrong calls to task the Bush administration for its abandonment of true conservatism including:

*The neo-conservative cabal-liberal wolves in conservative suits.
*Why the Iraq War has widened and imperiled the War on Terror.
*How current trade policy outsources American sovereignty, independence and industrial power.

"Buchanan is an honest writer who...minces nothing except an occasional opponent."
--The Philadelphia Inquirer

Patrick J. Buchanan was a senior advisor to three American Presidents, ran twice for the Republican nomination in 1992 and 1996, and was the Reform Party’s Presidential candidate in 2000. The author of seven books, Mr. Buchanan is a syndicated columnist and a political analyst for MSNBC. He is also Editor Emeritus of the political magazine, The American Conservative. He lives in McLean, Virginia.


Praise For Where the Right Went Wrong: How Neoconservatives Subverted the Reagan Revolution and Hijacked the Bush Presidency…

“Warm and self-deprecating, surprisingly witty, honest to a fault about his political views and not quite as knee-jerk a Reagan conservative as I'd been led to expect. Mr. Buchanan has a secret weapon: charm.” —Fred Barnes in The New York Times

“Patrick Buchanan is Dennis the Menance with the pen of H. L. Mencken.” —The Christian Science Monitor

“Patrick Buchanan is one hell of a wordsmith...” —The Village Voice