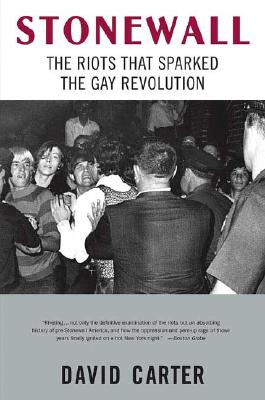 The Riots That Sparked the Gay Revolution

"Riveting...Not only the definitive examination of the riots but an absorbing history of pre-Stonewall America, and how the oppression and pent-up rage of those years finally ignited on a hot New York night." - Boston Globe

In 1969, a series of riots over police action against The Stonewall Inn, a gay bar in New York City's Greenwich Village, changed the longtime landscape of the homosexual in society literally overnight. Since then the event itself has become the stuff of legend, with relatively little hard information available on the riots themselves. Now, based on hundreds of interviews, an exhaustive search of public and previously sealed files, and over a decade of intensive research into the history and the topic, Stonewall brings this singular event to vivid life in this, the definitive story of one of history's most singular events.


Praise For Stonewall: The Riots That Sparked the Gay Revolution…

"A terrific piece of nonfiction, a satisfying and illuminating document that will be referred to time and again." - The Advocate

"Considering all that went before, the ongoing repression and corruption, and the scent of social and political liberation in the air, Carter's eloquent account makes it clear that something was bound to catch fire...A complete, full-bodied portrait, with lots of flesh on the bones of a strong narrative structure." - Kirkus Reviews

"No matter what you may believe about the event, you will gain new insights. Historically important and socially significant." - Dallas Morning News

"Stonewall presents a thorough and often compelling reconstruction of the nearly weeklong protest...provides thoughtful and sometimes delightfully quirky details about the era's gay culture and politics, Greenwich Village itself, and the New Yorkers - from mobsters to flame queens to cops - who that morning stumbled into history." - Providence Journal-Bulletin

David Carter is a freelance writer and editor who lives in New York City's Greenwich Village.
Loading...
or
Not Currently Available for Direct Purchase