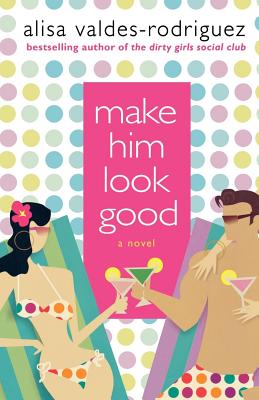 The "him" in Make Him Look Good is Ricky Biscayne, sexy Latin singing sensation who has taken the pop world by storm. But it takes more than swiveling hips and dreamy eyes to get to the top of the charts. The women who orbit Ricky are:

-- Milan, Ricky's new publicist, and her sister Geneva whose Club G promises to have Miami's hottest opening ever
-- Jill Sanchez, a media-manic Latina star who has crossed over from CDs to perfume, clothes and movies
-- Jasminka, Ricky's gorgeous Croatian model wife
-- Irene, a firefighter whose high school romance with Ricky was the last love in her life, eking out an existence for herself and her daughter Sophia, who is beginning to suspect that she and Ricky Biscayne look a little too much alike

With several satisfying romances set against Miami's music, club and modeling scenes, Make Him Look Goodis irresistible fiction from one of America's most original voices.


Praise For Make Him Look Good: A Novel…

“Escapist Entertainment with a Latina heart.” —AudioFile on The Dirty Girls Social Club

“Readers will snap this book off the shelves and not be disappointed.” —Booklist

“The real fun comes from eating up all the oh-no-she-didn't parallels between the characters' exploits and real-life celeb misbehavior.” —Entertainment Weekly

“Start reading it, and it's hard to stop.” —The Ohio Record Courier

“Valdes-Rodriguez really shines when she rips on the lifestyle of the rich and self-indulgent.” —Sunday Journal (Albuquerque, NM)

“The romp through Ricky's world of women is pure escapist fun.” —Calgary Herald