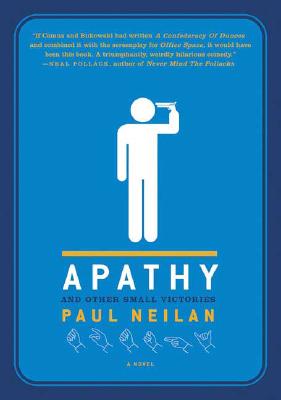 Apathy and Other Small Victories

A scathingly funny debut novel about disillusionment, indifference, and one man's desperate fight to assign absolutely no meaning to modern life.

The only thing Shane cares about is leaving. Usually on a Greyhound bus, right before his life falls apart again. Just like he planned. But this time it's complicated: there's a sadistic corporate climber who thinks she's his girlfriend, a rent-subsidized affair with his landlord's wife, and the bizarrely appealing deaf assistant to Shane's cosmically unstable dentist.

When one of the women is murdered, and Shane is the only suspect who doesn't care enough to act like he didn't do it, the question becomes just how he'll clear the good name he never had and doesn't particularly want: his own.

“The malaise of cubicle culture may be well-trodden comedic territory by now, but Neilan's debut skewers office life with a flourish for the grotesque.” —The Village Voice


Praise For Apathy and Other Small Victories: A Novel…

“Comprising 50% sheer brilliance, 50% distilled cynicism, and 50% coronary-inducing humor, Apathy and Other Small Victories has more life, laughs, and story on every page than should be possible. A heartbreakingly funny paean to supercharged nihilism, it's the best book you'll read in years, and the funniest novel ever. If you don't love it, there's something wrong with you, and if you do, there is also something wrong with you--but you won't care.” —Max Barry, author of Company

“Neilan's wit is a razor that cuts and slashes mercilessly on every single page, in every single paragraph, so that your fingers will bleed even as the tears of laughter soak your face. So basically, you'll be reduced to a bloody, weeping mess, madly reading whole pages aloud as friends and family shake their heads and slowly back away.” —Jonathan Tropper, author of Everything Changes

“The malaise of cubicle culture may be well-trodden comedic territory by now, but Neilan's debut skewers office life with a flourish for the grotesque.” —The Village Voice

Paul Neilan grew up in New Jersey before fleeing the Garden State for its polar opposite: Portland, Oregon. A graduate of Rutgers University, he worked a mind-numbing job in an insurance company where he spent much of his time asleep in the bathroom dodging his boss and his coworkers. It was in the uniquely creative zone of the disabled stall of that men's room, legs akimbo and drool puddling on the linoleum floor, that he began to hatch the idea for his first novel, Apathy and Other Small Victories.
Loading...
or
Not Currently Available for Direct Purchase