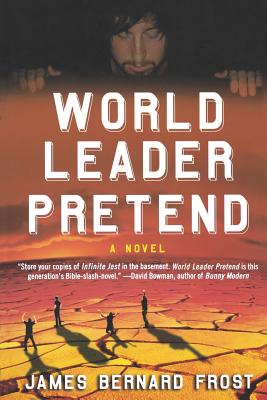 With over 100 million players world wide, virtual games are more than just a niche community, it's phenomenon. Now comes the first novel set in the world of virtual gaming World Leader Pretend.
Xeres Meticula is a failure. A casualty of the dot.com bust, he now lives in his parents' basement and spends all day on one pursuit, winning The Realm. Fortunately he's not alone. Joining him in his world is; Gek-Lin, an orphan in Thailand who spends her nights in an internet cafe; Dietrich Bjornson, a welder working in Antarctica; and Tres Rawling, a former Olympic skier for England whose career was cut short when an accident left him a quadriplegic; and many more. Together they communicate and connect, working to achieve virtual world dominance, but when tragedy on and off line occurs, can these real people trust each other enough to find the help they need in one another?
World Leader Pretend is a provocative novel about virtual connection in the modern age that reads like Curious Incident of a Dog in the Night meets Indecision.

"Teens will like World Leader because Frost ultimately is writing about the connections between people and how those connections can fail or succeed in the manmade world of The Realm or in the real time, real world of the 21st century." —School Library Journal

JAMES BERNARD FROST received his MFA in fiction from the University of San Francisco. He worked as a journalist for Wired magazine. He lives in Portland, Oregon. World Leader Pretend is his first novel.
Loading...
or support indie stores by buying on