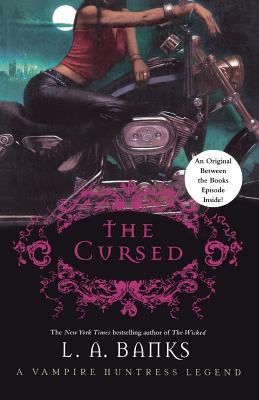 From the national bestselling author L. A. Banks comes a walk on the wild side with The Cursed, the ninth novel in the popular Vampire Huntress Legend series

The Chairman has been killed and now Lilith, Satan's Consort, sits on the vampire throne as the Vampire Council's new Chairwoman. She raises all the dark covens—calling every major dark witch and warlock to do her bidding. Her goal is to distract the team members, while the unborn heir to the Dark Realms awaits his own birth. All Lilith needs now is Damali's newly discovered angelic powers to make that come to pass. That will allow her evil progeny to walk through the veil between worlds and take his throne as the true Anti-Christ.

Damali and her crew race to stop Lilith. However, raising not only the dark covens, but all vampires that had not been slain by Damali, puts the world out of balance and kicks off the Armageddon.

“Stunning.” —Publishers Weekly on The Damned

“Each book in this. . .series gets harder and harder to put down.” —Romantic Times BOOKreviews

L. A. BANKS was the author of the Vampire Huntress Legend series and the Crimson Moon Novels, including Left for Undead and Never Cry Werewolf. She had a bachelor's degree from the University of Pennsylvania's Wharton School of Business and a master's in fine arts from Temple University. Banks considered herself a shape-shifter, writing romance, women's fiction, crime and suspense, and of course, dark vampire huntress lore. She lived with her daughter in Philadelphia until her death in 2011.
Loading...
or support indie stores by buying on