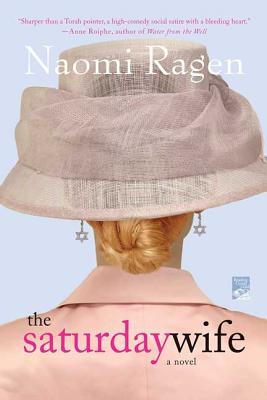 Bestselling author Naomi Ragen mixes poignant storytelling and irreverent wit with her talent for creating finely drawn characters in this tale of a young Rabbi's wife who slowly begins to unravel under the incessant and unreasonable demands of her congregation, her faith, and her life.

Beautiful, blonde, materialistic Delilah Levy steps into a life she could have never imagined when in a moment of panic she decides to marry a sincere Rabbinical student. But the reality of becoming a paragon of virtue for a demanding and hypocritical congregation at an Orthodox synagogue in the suburbs leads sexy Delilah into a vortex of shocking choices which spiral out of control into a catastrophe which is as sadly believable as it is wildly amusing.

Told with immense warmth, fascinating insight, and wicked humor, The Saturday Wife depicts the pitched and often losing battle of all of us as we struggle to hold on to our faith and our values amid the often delicious temptations of the modern world.


Praise For The Saturday Wife: A Novel…

“The pleasure of this novel is in its mercilessness, with Ragen raising the stakes until the very end.” —Publishers Weekly

“With The Saturday Wife, Naomi Ragen proves herself an adept satirist as well as a brilliant storyteller.... The heiress to such eternally discontented heroines as Emma Bovary and Undine Spragg, Delilah Goldgrab Levi's story is funny, poignant, and unforgettable.” —India Edghill, author of Wisdom's Daughter

Naomi Ragen is the author of several novels such as The Ghost of Hannah Mendes, The Covenant, The Sisters Weiss, and The Devil in Jerusalem. Her books are international bestsellers, and her weekly email columns on life in the Middle East are read by thousands of subscribers worldwide. Ragen attended Brooklyn College and earned her master’s in English from Hebrew University. An American, she has lived in Jerusalem since 1971. She was recently voted one of the three most popular authors in Israel.
Loading...
or support indie stores by buying on