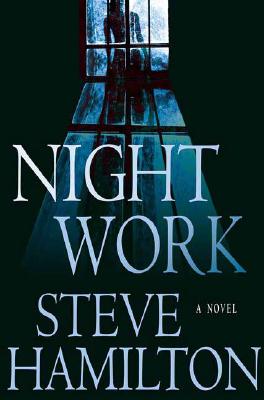 Award-winning author of the acclaimed Alex McKnight series Steve Hamilton delivers his eagerly awaited, breakaway thriller with "Night Work."
Joe Trumbull is not a man who scares easily. As a juvenile probation officer in Kingston, New York, he's half cop, half social worker to the most high-risk youth in the city. And when he's not pounding the streets, trying to keep his kids out of jail, he's pounding a heavy bag in the gym to stay in shape.
But tonight Joe Trumbull is scared to death.
It's been two years since his fiancee, Laurel, was brutally murdered. Two years of grief and loneliness. On this hot summer night, he's finally going out on a blind date, his first date since Laurel's death. He's not looking for love, just testing the waters to see if it's possible to live a normal life again. The thought of it is turning his knees to jelly.
Marlene Frost is a beautiful woman. She's warm and funny, with a smile to match. After the first awkward minutes, Joe finally starts to think this isn't such a bad idea after all. In fact, maybe this blind date will turn out to be one of the best things that ever happened to him.
He couldn't be more wrong. Because somehow, for reasons Joe can barely understand, this one evening will mark the beginning of a new nightmare. A nightmare that will lead him to the faceless man in the shadows, and to the most terrible realization of all.
For Joe Trumbull, the past is never past. And the worst is yet to come.

Steve Hamilton was born in Detroit and attended the University of Michigan, where he was awarded the prestigious Avery Hopwood Prize for writing. His first novel, "A Cold Day in Paradise, " won the PWA/SMP Best First Private Eye Novel Contest before going on to win both the Edgar and Shamus Awards for Best First Novel. In 2006, Steve won the Michigan Author Award for his outstanding body of work. He lives in Cottekill, New York, with his wife, Julia, and their two children.
Loading...
or
Not Currently Available for Direct Purchase