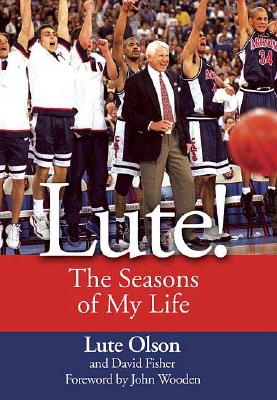 The Seasons of My Life

"It was love at first sight. . . . One day I picked up a basketball, and it never let me go."
For fifty seasons Lute Olson has been teaching young athletes the skills of basketball---and life. Starting as a high school coach, he worked his way to the top of the basketball world, winning more than a thousand games, a national championship, and a world championship, producing some of the NBA's biggest stars, and eventually being enshrined in the basketball Hall of Fame.
This is the story of his upbringing in Mayville, North Dakota, where he learned his famous work ethic and survival skills; the telling of the eighteen years it took to finally coach for a major college team; the fond memories of coaching famed players as well as the stories of bitter losses and breathtaking wins. This is his story, from recruiting in the dangerous projects of big cities and the vast farmlands of the Midwest, to finally winning an NCAA championship. It's the inside-the-locker-room story of many extraordinary emotional moments that will live forever in basketball lore. "Lute Lute Lute " The cheer by which the Arizona fans greet their coach before each game is the story of a man with a lifelong passion for a game. This book will take the reader inside the incredibly popular world of collegiate basketball, as seen through the eyes of a giant of the sport.
But his is far more than a basketball story. Lute's partner for forty-seven years in building championship programs was his high school sweetheart, Bobbi, whose blueberry pancakes became as widely known in the basketball world as his own full head of white hair. While Lute was the taciturn coach, she became the player's mother-away-from-home. America got to meet her as she fought her way courtside through cheering fans after Lute's Arizona team had earned a trip to the Final Four, and on national television he swept her off her feet and the two of them whirled round and round in joy. It is a love story of a couple who together built a sports legend. Lute and Bobbi Olson were a team. The Arizona community loved her almost as much as he did---traditionally at the beginning of each game the Wildcat band greeted them with a cheer. Their almost half-century love affair ended with Bobbi's death from cancer. Lute explores how he dealt with her death, and how he moved forward to find a new love.
This is the chronicle of one American boy's dream to become a great basketball coach---his achievements, his coaching strategies, and the wins and losses he faced as boy, man, and coach, but always with one constant in his life: the game of basketball. This is the story of fifty seasons in the life of Lute Olson.

LUTE OLSON, a native of Mayville, North Dakota, has been a college head coach the last thirty years. He has won more than eight hundred games while coaching at Long Beach City College, Long Beach State, the University of Iowa, and the University of Arizona. In 1997, Olson led the Arizona Wildcats to the NCAA championship and in 1988, 1994, 1997, and 2001 to the Final Four. His twenty-six NCAA Tournament appearances are the second most among active coaches, and his forty-five NCAA wins are also the second most among active coaches and tied for fourth all-time. As head coach at Iowa, Olson led the Hawkeyes to the 1979 Big Ten championship and five consecutive trips to the NCAA Tournament. He was named national Coach of the Year in 1988 and 1990. In addition, Olson was the gold medal--winning coach of the 1986 World Championship teams, the latter of which was the United States' last major international win with collegiate players making up the roster. In 2002 he was inducted into the Basketball Hall of Fame.

DAVID FISHER has collaborated on more than a dozen "New York Times" bestsellers. Among his bestselling sports books are "It's Only a Game" and "Keep It Simple" with Hall of Fame quarterback and broadcaster Terry Bradshaw.
Loading...
or
Not Currently Available for Direct Purchase