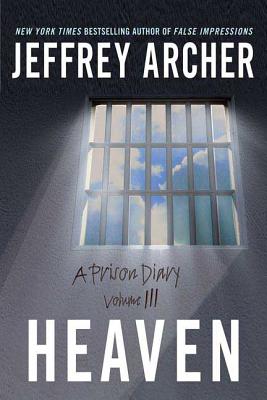 Heaven, Jeffrey Archer's final volume in his trilogy of prison diaries, covers the period of his transfer from a medium security prison, HMP Wayland, to his eventual release on parole in July 2003. It includes a shocking account of the traumatic time he spent in the notorious Lincoln jail and the events that led to his incarceration there, and also shines a harsh light on a system that is close to its breaking point.

Told with humor, compassion, and honesty, the diary closes with a thought-provoking manifesto that will be applauded by reform advocates and the prison population alike.

"The books form the most detailed and illuminating account of life spent under lock and key since Dostoyevsky."
---Mail on Sunday (UK)

"Compelling reading. . . . Archer knows how to tell a story.  He exposes real problems in the penal system."
---Houston Chronicle on A Prison Diary

"A tale that is not only important but true."
---The Washington Post on A Prison Diary

"The finest thing that he's ever written . . . so clear and crisp is the prose, a vivid and almost 'live' account that bubbles with Dickensian detail and a Shavian sense of outrage…. Riveting."
---Independent on Sunday (UK) on A Prison Diary

"False Impression…may be a worthy successor to the still bestselling The Da Vinci Code….Sail along from one high crime to the next."
---Liz Smith, The New York Post

JEFFREY ARCHER was educated at Oxford University. He served five years as a Member of Parliament in the House of Commons and has served twenty-six years as a Member of the House of Lords. Now published in 97 countries and more than 37 languages, all of his novels and short story collections—including Kane & Abel, Only Time Will Tell and This Was a Man—have been international bestsellers. Jeffrey is married with two sons and three grandchildren, and lives in London, Cambridge and Majorca.
Loading...
or support indie stores by buying on