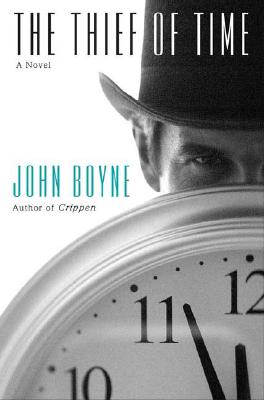 The Thief of Time (Hardcover)

John Boyne has become internationally known for his acclaimed novels Crippen and the bestselling The Boy in the Striped Pajamas. Now, for the first time in the United States, comes the book that started the career of the author that the Irish Examiner calls "one of the best and original of the new generation of Irish writers."
It is 1758 and Matthieu Zela is fleeing Paris after witnessing the murder of his mother and his stepfather's execution. Matthieu's life is characterized by one extraordinary fact: before the eighteenth century ends, he discovers that his body has stopped ageing. At the end of the twentieth century and the ripe old age of 256 he is suddenly forced to answer an uncomfortable question: what is the worth of immortality without love?
In this carefully crafted novel, John Boyne juxtaposes history and the buzz of the modern world, weaving together portraits of 1920s Hollywood, the Great Exhibition of 1851, the French Revolution, the Wall Street Crash, and other landmark events into one man's story of murder, love, and redemption.

John Boyne is author of the adult novel "Crippen "as well as the "New York Times" and internationally bestselling children's novel "The Boy in the Striped Pajamas." He has taught creative writing at the Irish Writers' Centre and at the University of East Anglia in the United Kingdom. In 2005, "Crippen" was nominated for the "Sunday Independent" Hughes & Hughes Irish Novel of the Year Award. Boyne has also been awarded the Curtis Brown Prize, shortlisted for a Hennessy Literary Award, and shortlisted for the Ottakar's Children's Book Prize and Italy's Paolo Ungari Literary Award for "The Boy in the Striped Pajamas." Boyne's work has been translated into twenty-one languages. He lives with his partner in Dublin.

Praise For The Thief of Time…

British Praise for The Thief of Time

"Extraordinary.… The various strands of the story are resolved with a stylish twist and genuine warmth."
--The Sunday Express

"A delightful epic, filled with twists and treachery, and vividly told."
--The Herald

"A minor masterpiece of organisation and historical sampling."
--Time Out

"Boyne is a skilful storyteller… The novel is superbly constructed."
--Sunday Tribune

"Boyne is to be commended for his ability to alternate between Wodehousian humor and Edwardian noir."
--Publishers Weekly (starred review)