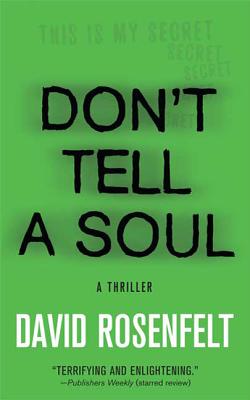 “What starts out as a conversation in a bar with a total stranger becomes a tension-filled game being played by someone out to get Tim Wallace, an innocent victim who becomes a prime murder suspect. This exciting story has a clever plot and it races along as Tim finds himself in deeper and deeper trouble.”
— Susan Wasson, Bookworks, Albuquerque, NM
View the List

Tim Wallace's wife was killed in a boating accident several months ago--and one New Jersey cop is sure he did it. He didn't. But even if the police eventually clear his name, he'll never get over this terrible tragedy

It's New Year's Eve. Tim's buddies convince him to go out for the first time since his wife's death. They're at a local pub when, just before midnight, a drunken stranger approaches Tim--and asks him a compelling question.

Soon the man confesses to a months-old murder--even offering as proof the location of the woman's body. "Now it's your problem," he says to Tim before walking away. When the man turns out to have been telling the truth, Tim's life goes from bad to worse as he is put under the microscope again by the cops--and this time they're not giving up. But neither is Tim: He is the only one who can figure out what's really going on--and who murdered his wife

"Don't Tell a Soul" is an electrifying stand-alone thriller from David Rosenfelt, bestselling author of the Andy Carpenter novels.

David Rosenfelt is the Edgar and Shamus Award-nominated author of six novels featuring lawyer Andy Carpenter, most recently Play Dead. He and his wife live in California with their thirty-seven golden retrievers.

“Stellar… Rosenfelt keeps the plot hopping and popping as he reveals a complex frame-up of major proportions with profound political ramifications both terrifying and enlightening.”—Publishers Weekly (starred)

“This fast-paced and brightly written tale spins along.… Don’t Tell a Soul is a humdinger.”—St. Louis Post-Dispatch

“High-voltage entertainment from an author who plots and writes with verve and wit…Rosenfelt ratchets up tension with the precision of a skilled auto mechanic wielding a torque wrench.”
—Booklist (starred)

“[Rosenfelt] has pulled together a cynical political thriller that rings true in this age of terrorism, media hype and Washington scandals…. it’s an enjoyable tale.”—Minneapolis Star Tribune

“Rosenfelt’s first stand-alone novel is a riveting thriller that should boost him to best-seller status…Compelling twists and turns, a lightning-fast pace, and breathtaking suspense make this a harrowing ride…The book deserves a wide audience.”—Library Journal (starred)