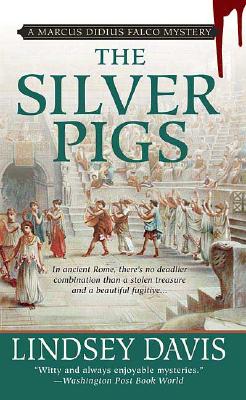 When Marcus Didius Falco, a Roman "informer" who has a nose for trouble that's sharper than most, encounters Sosia Camillina in the Forum, he senses immediately all is not right with the pretty girl. She confesses to him that she is fleeing for her life, and Falco makes the rash decision to rescue her--a decision he will come to regret. For Sosia bears a heavy burden: as heavy as a pile of stolen Imperial ingots, in fact. Matters just get more complicated when Falco meets Helena Justina, a Senator's daughter who is connected to the very same traitors he has sworn to expose. Soon Falco finds himself swept from the perilous back alleys of Ancient Rome to the silver mines of distant Britain--and up against a cabal of traitors with blood on their hands and no compunction whatsoever to do away with a snooping plebe like Falco .

Lindsey Davis was born and raised in Birmingham, England. After taking an English degree at Oxford and working for the civil service for thirteen years, she "ran away to be a writer." Her internationally bestselling novels featuring ancient Roman detective Marcus Didius Falco include "Venus in Copper," "The Iron Hand of Mars," "Nemesis" and "Alexandria." She is also the author of "Rebels and Traitors," set during the English Civil War. Davis is the recipient of the Crime Writers' Association Cartier Diamond Dagger Award, the highest accolade for crime writers, as well as the Ellis Peters Historical Dagger Award and the Authors' Club Best First Novel award.

Praise For The Silver Pigs: A Marcus Didius Falco Novel…

"Davis is both a deft storyteller and a scholar…a top drawer series."
--Newsday RAVES FOR LINDSEY DAVIS AND
THE MARCUS DIDIUS FALCO SERIES

"The Rome of Davis' imagination is licentious and entertaining."
--San Jose Mercury News

"An excellent series."-Library Journal
"Excellent… a cross between I, CLAUDIUS and MYSTERY!"
--Rocky Mountain News

"A pure delight… brilliantly [immerses] us in the marvels of ancient Roman life."--Good Book Guide on The Accusers

"An irresistible package of history, mystery, and fast-moving action, all punctuated by a sense of humor that few writers can match."--Cleveland Plain Dealer on Venus in Copper

"Davis's vision of everyday life in the Roman Empire is superb. I haven't read historical fiction this good since I, Claudius by Robert Graves and The Persian Boy by Mary Renault."--Detroit Free Press on Shadows in Bronze

"Lindsey Davis doesn't just bring Rome to life--she brings life to Rome better than anyone else ever has."--Detroit Free Press on The Iron Hand of Mars