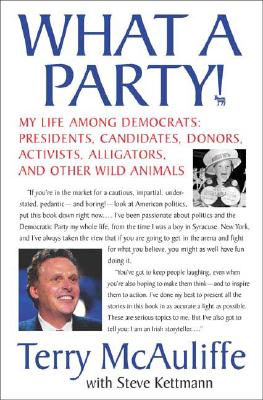 What A Party! (Hardcover)

My Life Among Democrats: Presidents, Candidates, Donors, Activists, Alligators and Other Wild Animals

"I thought I knew Terry McAuliffe as well as anyone, but this time he surprised even me. Who knew Terry could sit still long enough to give us a book this good? "What a Party " is a must-read for all of us who love politics, believe in public service, and know that laughter is often the best survival strategy."
--President Bill Clinton
"No one knows more about American politics than Terry McAuliffe. He gives
us some remarkable insights and knows how to make his accounts both humorous
and informative."
--President Jimmy Carter
"I've often said Terry's energy could light up a city, and readers of this book will know why. Terry's excitement for politics--and life--is evident on every page." --Senator Hillary Clinton For more than twenty-five years, Terry McAuliffe has been at the epicenter of American politics. Just out of Catholic University in Washington, Terry took a position with the Carter-Mondale campaign and quickly became one of the campaign's chief fund-raisers--and hasn't looked back since. The list of Terrys former mentors, friends, and close associates in the nation's capital reads like a who's who of legendary Democrats: Tip O'Neill. Jimmy Carter. Dick Gephardt. Bill Clinton. Hillary Clinton. Al Gore. The list goes on and on. Terry has fought hard for the Democratic Party his entire life and, as Bill Clinton reveals here for the first time, he was the first one in the party to see opportunity in the Republican gains in the 1994 Congressional elections.
Without question the most successful fund-raiser in political history, Terry established himself as a heavyweight Democratic strategist and leader who was George W. Bushs most vocal and persistent critic during the first four years of the Bush 43 presidency. He earned rave reviews even from former critics for his groundbreaking work as chairman of the Democratic National Committee from 2001 to 2005, pulling the DNC out of debt for the first time in its history. Terry has served as a confidant and adviser to President Clinton and countless presidential candidates, a mediator among party leaders, the chairman of a national convention and presidential inaugural, and a forceful spokesman for the party--all without losing his reputation as a colorful, fun-loving character liked and respected even by his Republican adversaries.
"What a Party " is a fascinating, hilarious, and provocative look at the life of one of Washington's legendary figures. From wrestling an alligator to running the Democratic National Committee to his friendship with President Clinton, Terry McAuliffe's wonderful memoir covers it all and is, without doubt, the political book of the year.

Terry McAuliffe is the Governor-elect of Virginia, former chairman of the Democratic National Committee, legendary fund-raiser, and confidant of Presidents. He lives in McLean, Virginia, with his wife, Dorothy, and their five children. Steve Kettmann has written for publications including "The New York Times," "The New Republic, " and "Salon.com." The author of "One Day at Fenway, " Steve cowrote the #1 "New York Times" bestseller, "Juiced, " with Jose Canseco.
or
Not Currently Available for Direct Purchase
Copyright © 2020 American Booksellers Association