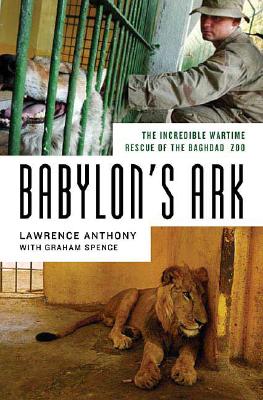 The Incredible Wartime Rescue of the Baghdad Zoo

When the Iraq war began, conservationist Lawrence Anthony could think of only one thing: the fate of the Baghdad Zoo, located in the city center and caught in the war's crossfire. Once Anthony entered Baghdad he discovered that full-scale combat and uncontrolled looting had killed nearly all the animals of the zoo. But not all of them. U.S. soldiers had taken the time to help care for the remaining animals, and the zoo's staff had returned to work in spite of the constant firefights. Together the Americans and Iraqis had managed to keep alive the animals that had survived the invasion.Babylon's Ark chronicles the zoo's transformation from bombed-out rubble to peaceful park. Along the way, Anthony recounts hair-raising efforts to save a pride of the dictator's lions, close a deplorable black-market zoo, and rescue Saddam's Arabian horses. His unique ground-level experience makes Babylon's Ark an uplifting story of both sides working together for the sake of innocent animals caught in the war's crossfire.


Praise For Babylon's Ark: The Incredible Wartime Rescue of the Baghdad Zoo…

"Babylon's Ark is a compelling story of one dedicated man's efforts to save the abandoned animals of the Baghdad Zoo amidst the chaos, danger and uncertainty of a city under siege during the coalition invasion of 2003. Lawrence Anthony shows his courage and intense devotion to the animal kingdom as he risks his life in an effort to shut down the Baghdad Zoo and rehabilitate it. Anthony's crusade for the animals of the Baghdad Zoo is truly his line in the sand."
--Jay Kopelman, author of From Baghdad, With Love: A Marine, the War, and a Dog Named Lava

LAWRENCE ANTHONY is an acclaimed conservationist and founder of the Earth Organization. He received the UN's Earth Day award (making him the first South African to receive the award) for his work in Baghdad. He lives in Zululand, South Africa. GRAHAM SPENCE is a journalist and editor. Originally from South Africa, he now lives in England.
Loading...
or
Not Currently Available for Direct Purchase