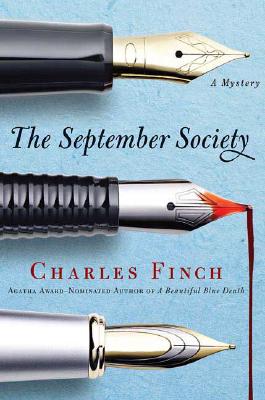 The sitting room looked as familiar as the back of his hand, and immediately Lenox took a liking to the young man who inhabited it. He saw several small artifacts of the missing student’s life---a frayed piece of string about two feet long of the sort you might bind a package with, half of a pulpy fried tomato, which was too far from the breakfast table to have been dropped, a fountain pen, and lastly, a card which said on the front The September Society. . . .

In the small hours of the morning one fall day in 1866, a frantic widow visits detective Charles Lenox. Lady Annabelle’s problem is simple: her beloved son, George, has vanished from his room at Oxford. When Lenox visits his alma mater to investigate, he discovers a series of bizarre clues, including a murdered cat and a card cryptically referring to the September Society.

Then, just as Lenox realizes that the case may be deeper than it appears, a student dies, the victim of foul play.

What could the September Society have to do with it? What specter, returned from the past, is haunting gentle Oxford? Lenox, with the support of his devoted friends in London’s upper crust, must race to discover the truth before it comes searching for him, and dangerously close to home.


Praise For The September Society…

Advance Praise for The September Society


“An intriguing glimpse of student life at Oxford during the mid-Victoria era with a sleuth to rival Sherlock Holmes, only with more foibles and warmth than the original.” ---Rhys Bowen, author of Tell Me, Pretty Maiden


“Reminiscent of Ruth Rendell and Elizabeth George . . . one hopes to see more of Lenox and Lady Jane.” ---Booklist


Praise for A Beautiful Blue Death
“Vividly capturing the essence of Victorian England, Finch presents us with a unique sleuth who combines the deductive powers of Sherlock Holmes with the people skills of Thomas Pitt. A sparkling achievement.” ---Library Journal (starred review)

“A fine specimen of the genre . . . Particularly good is [Finch’s] delineation of Lenox’s cozy but proper relationship with Lady Jane.” ---Washington Post

“The best sort of historical mystery---clever, charming, full of period detail, and a delight to read.” ---David Liss, author of The Whiskey Rebels

CHARLES FINCH is a graduate of Yale and Oxford. His first novel, "A Beautiful Blue Death, " was named one of Library Journal's Best Books of 2007, one of only five mystery novels on the list. He lives in New York.
Loading...
or
Not Currently Available for Direct Purchase