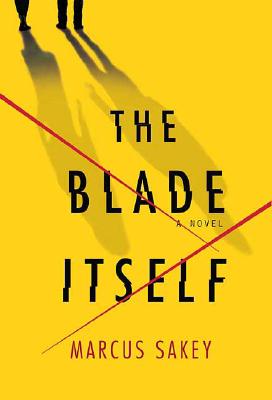 The Blade Itself (Hardcover)

How far would you go to protect everything you love? On the South Side of Chicago, you're only as strong as your reputation. Danny Carter and his best friend, Evan, earned theirs knocking over pawnshops and liquor stores, living from score to score, never thinking of tomorrow.
Then a job went desperately wrong, and in the roar of a gun blast, everything changed. Years later, Danny doesn't think about his past. He's built a new world for himself: a legitimate career, a long-term girlfriend, and a clean conscience. He's just like anyone else. Normal. Successful. Happy. Until he spots his old partner staring him down in a smoky barroom mirror. The prison-hardened Evan is barely recognizable. Having served his time without dropping Danny's name, his old friend believes he's owed major payback---and he's willing to do anything to get it. With all he loves on the line and nowhere to turn, Danny realizes his new life hinges on a terrible choice: How far will he go to protect his future from his past? A debut novel that's drawn comparison to Dennis Lehane, Laura Lippman, and Quentin Tarantino, The Blade Itself is the story of a good man held hostage by circumstance; a riveting exploration of class, identity, and the demons that shape us, where every effort to do the right thing leads to terrifying consequences and one inevitable conclusion:

Marcus Sakey is an award-winning advertising writer. While researching "The Blade Itself" he shadowed homicide detectives, toured the morgue, and learned to pick a dead bolt in sixty seconds. Born in Flint, Michigan, he now lives in Chicago with his wife. Visit his Web site at www.MarcusSakey.com for contests, behind-the-scenes info, and an excerpt of his upcoming novel.

Praise For The Blade Itself…

"The Blade Itself is a terrifically good debut---streetwise, heartfelt, and exciting. I loved this book."
---T. Jefferson Parker, author of The Fallen

"Simply put, Marcus Sakey has penned one of the most stunning and appealing works of fiction I've ever read. It's quite possible that The Blade Itself will be recognized as the crime debut of the decade."
---Victor Gischler, author of Gun Monkeys