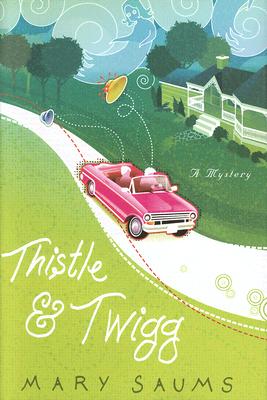 Jane Thistle is a widow who has just settled down in Tullulah, Alabama, after a long and happy life with her husband, a career military officer whose job took them all over the world. But now that she's on her own, she's just as happy to have found this delightful small Southern town to call home. Her new best friend is Phoebe Twigg, also a widow, who has lived in Tullulah all her life. Phoebe is about as different as could be from the worldly and refined Jane Thistle, but her colorful personality and warm, welcoming Southern nature make them quite a team.  The two ladies become fast friends when they stumble on a dead body while on a walk in the woods near Jane's new house. And that's not all of the mysteries interrupting the slow life in Tullulah: Someone seems to be threatening Jane's neighbor, a local old recluse who seems to have more interest in the land than in its inhabitants; a firebomb explodes in Phoebe's kitchen; and unexplainable sounds and objects turn up at the strangest times in Jane's house. Jane and Phoebe quickly become partners in investigation in Mary Saums's funny and charming---and surprising---debut mystery.


Praise For Thistle and Twigg…

Advance Praise for Thistle and Twigg

"Thistle and Twigg, the most entertaining and innovative series debut in many years, brims with intelligence, humor, and insightfulness."
--Carolyn Hart, author of Dead Days of Summer

"Delightful… Saums ably weaves humor, suspense, and a dash of the supernatural in this winning twist on the Southern cozy."
--Publishers Weekly

"A satisfying mystery… Phoebe and Jane, with their quite different personalities, make an interesting team in this series debut."
--Booklist

MARY SAUMS was born and raised in northern Alabama. After college, she worked as a recording engineer in Muscle Shoals on gold and platinum albums by Bob Dylan, Roy Orbison, Jimmy Buffett, Glenn Frey, and others. Her poetry has won a Tennessee Writers Alliance Award. The author of several short stories and three previous novels, she lives in Nashville, Tennessee.
Loading...
or
Not Currently Available for Direct Purchase