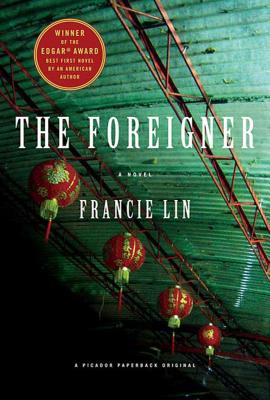 Set against the Taiwanese criminal underworld, The Foreigner is Francie Lin's audacious debut novel. A noirish tale about family, fraternity, conscience, and the curious gulf between a man's culture and his deepest self

Emerson Chang is a mild mannered bachelor on the cusp of forty, a financial analyst in a neatly pressed suit, a child of Taiwanese immigrants who doesn't speak a word of Chinese, and, well, a virgin. His only real family is his mother, whose subtle manipulations have kept him close--all in the name of preserving an obscure idea of family and culture.

But when his mother suddenly dies, Emerson sets out for Taipei to scatter her ashes, and to convey a surprising inheritance to his younger brother, Little P. Now enmeshed in the Taiwanese criminal underworld, Little P seems to be running some very shady business out of his uncle's karaoke bar, and he conceals a secret--a crime that has not only severed him from his family, but may have annihilated his conscience. Hoping to appease both the living and the dead, Emerson isn't about to give up the inheritance until he uncovers Little P's past, and saves what is left of his family.

The Foreigner is a darkly comic tale of crime and contrition, and a riveting story about what it means to be a foreigner--even in one's own family.

FRANCIE LIN, a former editor at The Threepenny Review, received a Fulbright Fellowship to Taiwan in 2001-2002. She is the author of The Foreigner and lives in Greenfield, Massachusetts.

Praise For The Foreigner: A Novel…

“Genre-wise, The Foreigner is best described as a thriller, rife with murders, drugs, secrets and betrayals. But you won't find any of the cardboard characters, clunky writing, or clichéd conventions that too often mar suspense fiction. Lin is equally attentive to description and plot. . . . Lovely, detailed writing makes you care about what happens to these characters. . . . A sequel would prove most welcome.” —Los Angeles Times

“Lin demonstrates admirable range and skill in The Foreigner. She's capable of writing both marvelous humor and scenes of utter darkness in her tale of a naive man at a complete loss for dealing with the world.” —San Francisco Chronicle

“Lin has much to say about the clast of East and West and the sometimes shaky bonds of family, wrapping her sly observations in an entertaining coating of ever-propulsive narrative that turns Emerson from a rich boy into a warier, sleeker, wiser man.” —The Baltimore Sun